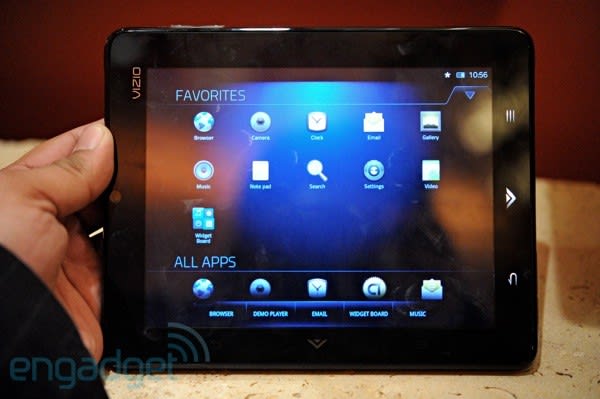 We just had our first in-depth experience with the Vizio Tablet, the company's opening overture into the world of Android slates, and we've got to say -- we like what we see. The device -- which was just announced Monday afternoon along with the company's new smartphone, the Vizio Phone -- is still rather unfinished (the model we looked at was a hand-built device), but based on this early look, the company is moving down the right roads. We had a good chance to play around with the tablet, and we've got all the details, specs, and an in-depth video after the break! 
The hardware itself is extremely clean, but manages to retain some personality. The device is about the same thickness as the iPad, and has a similar glossy black front and bezel, though around back you're treated to a stylish, matte gray finish. The screen itself is an 8-inch LCD clocking in at 1024 x 768 (pixel density looks tighter than the iPad, due largely in part to that smaller screen), and is fairly responsive to touch -- though again, the software is quite early. Since this isn't an IPS display, the viewing angles weren't mind-blowing, but they seemed perfectly acceptable. Inside, there's a "1GHz plus" CPU, though the company wouldn't fess up to the make and model. Likewise on the memory, but there is 4GB of storage inside (2GB for user, 2GB for the OS), but there's a microSD slot present. Speaking of, along the bottom of the tablet is a Micro USB and HDMI port, a volume rocker on the right side, two speakers on the top (when in portrait), and another speaker on the right side (when in landscape). That's of particular note, because the company has partnered on with SRS on a surround sound emulation that works in both orientations. It's pretty damn cool. Also cool? The device has an IR blaster built in to the top (in portrait), and it can function as a universal remote.

The tablet is running Android, though Vizio didn't say what version. To our eyes it looked like a variation on 2.2 or 2.3 -- we didn't see any indication that it was Honeycomb. There's still some rough animation and very buggy aspects to the UI, but many of the ideas are incredibly solid, like the notification window which groups by application and age, as well as the ability to create your own folders or groups of applications and quickly page through them. The tablet is meant as a component of the company's VIA Plus ecosystem, meaning there are going to be a lot of hooks into Vizio HDTVs and other products the company produces.

Vizio isn't talking about price, though reps were emphatic about being "very competitive" with players in the market. We also didn't get a solid release date, but the company is targeting a summer launch. We're going to try and get some more face time with this device as the company builds out the OS and gets some final hardware, but for now, enjoy the hands-on video, and check out some close-up pics in the gallery.
In this article: android, android 2.2, android 2.3, Android2.2, Android2.3, breaking news, BreakingNews, ces, ces 2011, ces2011, google honey comb, GoogleHoneyComb, honey comb, honeycomb, impressions, preview, tablet, via, via plus, via tablet, ViaPlus, ViaTablet, video, vizio, vizio tablet, vizio via tablet, VizioTablet, VizioViaTablet
All products recommended by Engadget are selected by our editorial team, independent of our parent company. Some of our stories include affiliate links. If you buy something through one of these links, we may earn an affiliate commission.