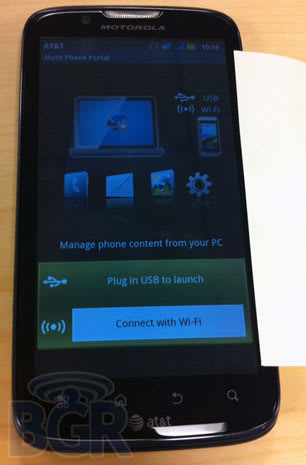 Now that the tidal wave of Bionic hype has crashed upon Verizon's shore, it's time to focus our anticipation on Moto's other beast phone -- the Atrix 2. Leaked shots of the AT&T-branded update came to light this past July, giving us a glimpse of its Blur-ified UI and some tentative specs. Well, we still don't have any official confirmation that these new images over on BGR are the real sequel, but the details are lining up with what we know. Purportedly, this handset refresh will not be a member of AT&T's new LTE brigade, although that could very well change. Expect a dual-core setup, 8 megapixel camera with 1080p video capture and Gingerbread 2.3.5 baked-in. Rumor has it the orange-colored carrier intends to ship this before year's end, but will it be enough to sway you from this?
Via: SlashGear
Source: BGR
In this article: 4G, Android 2.3.5, Android gingerbread, Android2.3.5, AndroidGingerbread, Atrix, Atrix 2, Atrix2, ATT, dual core, dual-core, DualCore, Gingerbread, Google Android, GoogleAndroid, LTE, mobilepostcross, Motorola, Motorola Atrix 2, MotorolaAtrix2
All products recommended by Engadget are selected by our editorial team, independent of our parent company. Some of our stories include affiliate links. If you buy something through one of these links, we may earn an affiliate commission.
Share
Tweet
Share