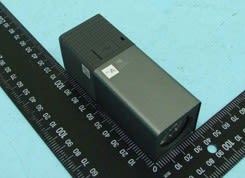 2011's most outrageously incredible camera just hit the FCC, leaving it a step or two shy of being on retail shelves here in America. The Lytro light field camera (hands-on) -- for those who blinked through late October -- is a rare game-changing device that enables photographers to shift the depth of field after the image has been captured. The downside, of course, is that this functionality is tucked into a pocket-sized toy rather than Canon's incoming EOS 1D-X (or similar), but we're hoping that it's only a matter of time before the company licenses this out to the big boys. The included user guide proves just how simple the $399 device will be to operate, but on the same token, how few options there will be for advanced users. Dig in yourself in the source link below -- looks like that "early 2012" shipping promise might just be kept.

Source: FCC, Lytro User Guide [PDF]
In this article: bokeh, camera, depth of field, DepthOfField, fcc, game changer, GameChanger, light field camera, LightFieldCamera, lytro, toy
All products recommended by Engadget are selected by our editorial team, independent of our parent company. Some of our stories include affiliate links. If you buy something through one of these links, we may earn an affiliate commission.
Share
Tweet
Share