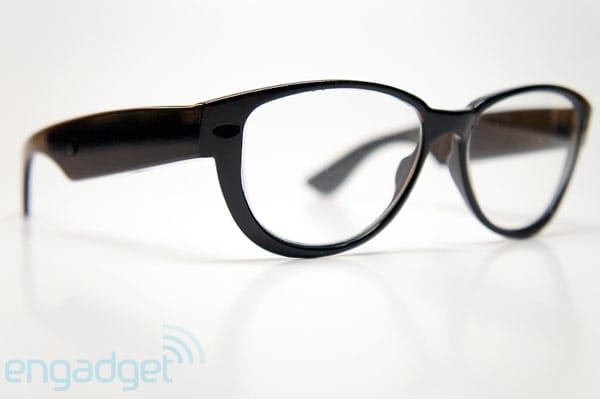 Sure, you may already lead an exciting life, but wouldn't it be great if you could broadcast those daily escapades -- you know, to all of your internet friends? ZionEyez hopes to deliver a method for sharing your point of view -- quite literally -- in realtime, across the web. The company's first product, a set of 720p embedded-camera eyeglasses called Eyez, houses a tiny camera to the left of the standard-size eyeglass lens, with a processor, Bluetooth and WiFi module embedded in the adjacent ear piece. We first read about the inconspicuous specs when the company launched a Kickstarter page, netting nearly $350,000 in pledges from curious backers, but just had an opportunity to spend a few hours with the device, recording the journey to a meeting in New York City. Jump past the break for a closer look, and our sample footage.


The issue of privacy is first to come to mind -- there's really no way to tell that the glasses contain a tiny camcorder (with mono audio capture) without an up-close inspection. It's not the first "spy cam" to come to market, however, though it may be the first with the possibility of becoming mainstream. Future Eyez owners will be responsible for disclosing when they hit record, so be sure to review (and observe) the laws for your locale.

The prototype we used was limited to local storage -- a separate, bulkier proto contained the radios necessary for wireless streaming, but wasn't available today. The 720p video quality wasn't spectacular, with horizontal bands of noise in shadow areas, but we were reminded many times that this is a very early prototype. We're told that the final version will be much sleeker (perhaps no larger than a pair of plastic Ray Bans), with much more polished video. Audio was a bit tinny as well, but we had no problem understanding the speaker as long as we weren't recording in a noisy, cavernous room. The Eyez weren't fully charged before our shoot, but we're told to expect between two and three hours of juice from the 350mAh battery, which you can charge using the proprietary USB cable.

ZionEyez reps weren't able to confirm a release date, but they did confirm a $199 price tag and showed us a mock-up of the final version, which looked fantastic. Since the Eyez themselves will be quite visible, exterior appearance is certainly not to be overlooked, but video quality is equally important. Check out the footage below for a very early look, keeping in mind that there's still plenty of time to work out the kinks before these start popping up on a temple near you.