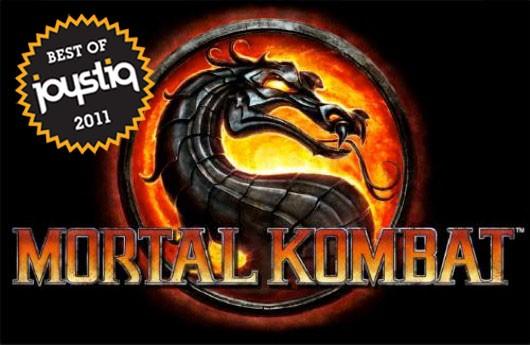 Fighting games are pretty serious business. The community that supports the arcade and tournament scene is composed of roughly the same people it was fifteen years ago, and as a result this particular corner of the gaming kingdom has a longer lasting, more detailed memory than most of its non-competitive contemporaries. This makes fighting game players hard to impress, especially when their opinion of your legacy titles is less than stellar.

Mortal Kombat had a heavy coating of nostalgia working for it prior to its launch, but it also had to contend with the series' long and storied history of brokenness and balance problems: Nearly every character in Mortal Kombat Trilogy had an infinite combo, for instance, which serves as a perfect example of what competitive fighting game players remembered about the franchise. Not to say that the old Mortal Kombat games weren't fun, because they were, they just weren't "tournament ready."

So, when April finally rolled around and Mortal Kombat landed in disc trays around the world, that's what everyone expected: The fun, over-the-top, painfully broken hodgepodge of violence and pseudo-Asian mythology we've all come to know and love over the last twenty-odd years. Little did we realize that what we were actually getting was not only the best fighting game of 2011, but one of the ten best games to come out all year.

From a strictly mechanical standpoint, Mortal Kombat has hit every single design nail square on the head. Its EX-move, Combo Breaker and X-Ray systems all provide the gameplay depth and technical intricacies needed for a truly sustainable fighting game, (depth which was lacking in previous entries), but by constraining all three techniques to the same special meter, NetherRealm Studios added an additional layer of strategy and play style customization to the game. Meter usage is a conscious choice in Mortal Kombat, because the use of an EX-Move may remove your ability to perform a Combo Breaker or X-Ray attack, both of which can easily change the outcome of a round when applied properly.

Beyond that, the actual character balance is fairly spot on, with very little discernable advantage difference between S-tier characters and bottom-tier ringers. Sure, some characters are still better suited for high-level play than others, and not every fight is completely even, but Mortal Kombat is free of the game-breaking balance issues suffered by the likes of Super Street Fighter 4: Arcade Edition and the original Marvel vs. Capcom 3. The whole thing is just so damn solid, it's impossible to celebrate how far the series has come.

All of these major improvements are buried deep within the bowels of the experience, however, and most players don't care about tier lists or frame data, and wouldn't give a second thought as to whether or not Ermac vs. Kano was 4:6 or 5:5 after the latest balance patch. For those not mired in the intricacies of fighting game design, NetherRealm Studios crafted not only the best story mode ever created for a fighting game, but also a wealth of challenges and alternative modes to keep things fresh through hours of couch multiplayer and button-mashing sessions. Couple all of that with the fastest, most intuitive online lobby system available in any fighting game to date, and you've got a recipe for excellence Capcom and Namco Bandai could stand to learn from.

Joystiq is revealing its 10 favorite games of 2011 throughout the week. Keep reading for more top selections and every writer's personal, impassioned picks in Best of the Rest roundups. The list so far:
In this article: joystiq-best-of-2011, microsoft, mortal-kombat-2011, netherrealm-studios, playstation, ps3, xbox
All products recommended by Engadget are selected by our editorial team, independent of our parent company. Some of our stories include affiliate links. If you buy something through one of these links, we may earn an affiliate commission.
Share
Tweet
Share