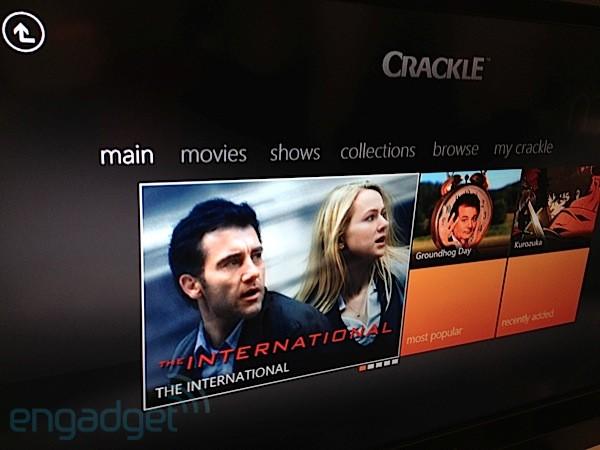 You can't deny one of Microsoft's main goals with its revamped 360 dashboard update was to enhance the box's entertainment attributes, and now the Redmond crowd has flipped the live switch on two more vid-focused apps. Crackle and CinemaNow are joining the likes of Vudu and UFC as part of the latest additions to the Xbox app locker. Both apps are available now for those of us in the States, and while CinemaNow won't be heading elsewhere, Sony's Crackle is hitting three other markets: Australia, Canada and United Kingdom. There's no more info on when -- or if -- both apps will make way into more countries, but Microsoft did say that it'll "continue to enhance and expand" its Xbox Live offerings. We know you're eager to check out some Godzilla collections, so power on that console, head to the apps section and let the crackles set you free.
Show full PR text
Crackle Launches Voice-controlled Experience on Xbox 360

Bringing Hundreds of Free Full-Length Hollywood Movies and TV Shows, including TALLADEGA NIGHTS: THE BALLAD OF RICKY BOBBY, YEAR ONE and THE INTERNATIONAL


CULVER CITY, Calif., Jan. 31, 2012 /PRNewswire/ -- Crackle, Inc., Sony Pictures Entertainment's multi-platform video entertainment network, has launched today on the Xbox LIVE® online entertainment network as a free full-length Hollywood movie and TV app, it was announced by the company. Crackle's partnership with the Xbox 360® video game and entertainment system from Microsoft marks another exciting expansion for the brand, broadening its slate of distribution partners for its users. The Crackle app is now available in the Xbox LIVE® marketplace in the U.S., U.K., Canada and Australia.*

"Crackle is the single best multi-platform source of free, ad-supported Hollywood films and television series," said Phil Lynch, VP Digital Networks and Games at Sony Pictures Television. "By our continued emphasis on cross-platform distribution, we are bringing an unparalleled viewing experience directly to Crackle's target demographic of 18-34 males through their internet-enabled devices. We are thrilled to be a part of Xbox LIVE's entertainment expansion."

"Our partnership with Crackle marks a significant milestone in our vision to bring you all the film and TV entertainment you want, shared with the people you care about, made easy," said Pete Thompson, General Manager, Xbox LIVE. "By bringing Crackle to the Xbox LIVE service and adding the magic of Kinect, we are transforming the way consumers experience entertainment forever."

By partnering with Xbox, and through the magic of Kinect for Xbox 360, Crackle offers consumers yet another way to enjoy free, ad supported full-length Hollywood movies and TV series. Adding the Kinect experience to Crackle's content allows consumers to interact with their favorite Crackle movies and TV shows in a more personal, seamless and effortless way. The voice- and motion-activated controls with Kinect and voice search with Bing on Xbox allow Crackle viewers to quickly find the content they want. For example, users are able to search for a movie on Xbox LIVE by stating, "Xbox, Bing: THE INTERNATIONAL," or use verbal commands to play a movie on Xbox LIVE by stating, "Play DONNIE BRASCO," in this breakthrough new way to find and watch their favorite movies.

All Crackle content, which includes more than 200 films from studios including Columbia Pictures, TriStar Pictures, Screen Gems, Sony Pictures Classics and more, is now available to watch for free with an Xbox LIVE Gold membership. In addition, the Crackle service offers over 1,500 full-length television episodes in genres its audience loves best: action, comedy, crime, horror, thriller and sci-fi. A sampling of the movie and TV offerings available on Xbox LIVE in the U.S. includes:

TALLADEGA NIGHTS: THE BALLAD OF RICKY BOBBY
THE INTERNATIONAL
YEAR ONE
DEUCE BIGALOW: EUROPEAN GIGOLO
THE MOTHMAN PROPHECIES
GROUNDHOG DAY
DONNIE BRASCO
DEFENDOR
THE MESSENGERS
"Seinfeld"
"Married...with Children"
"News Radio"
"Jackie Chan Adventures"
"Bewitched"
Hundreds of episodes of anime including "Samurai X," "Blood +" and "Blue Exorcist"
Plus over 40 Crackle originals including "Issues," "Why It Crackles," "Urban Wolf" and more, as well as the award-winning "The Bannen Way."
Movie and TV shows available on Xbox LIVE in Canada, include:

*An Xbox LIVE Gold membership will be required to enjoy the Xbox LIVE Crackle app.
In this article: app, apps, australia, canada, cinemanow, crackle, hdpostmini, microsoft, uk, united kingdom, UnitedKingdom, xbox, xbox 360, xbox 360 apps, xbox 360 dashboard, xbox 360 dashboard update, Xbox360, Xbox360Apps, Xbox360Dashboard, Xbox360DashboardUpdate
All products recommended by Engadget are selected by our editorial team, independent of our parent company. Some of our stories include affiliate links. If you buy something through one of these links, we may earn an affiliate commission.
Share
Tweet
Share