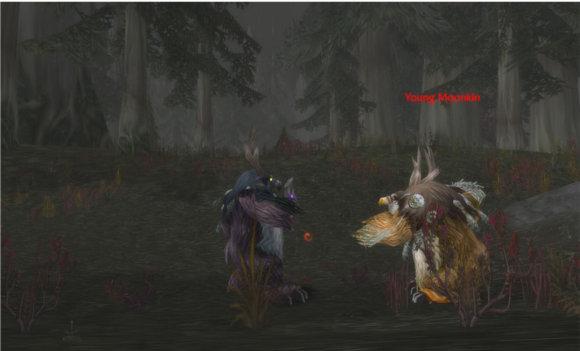 Every week, WoW Insider brings you Shifting Perspectives for cat , bear , restoration and balance druids. Balance news comes at you every Friday -- learn how to master the forces of nature, and know what it means to be a giant laser turkey! Send questions, comments, or requests to tyler@wowinsider.com or @murmursofadruid.

Greetings, druids. Last week we talked about the new changes that had been made to the Mists of Pandaria talent calculator, which held a few good changes for us. This week I want to focus in on two criticisms that I've had growing for a very long time. It's no shock to anyone that reads my column or follows me on Twitter that I abhor the new direction of Insect Swarm.

I've talked about this topic before, but I want to discuss it further.

Looking into the why

In the essence of fairness, I feel that I should go into why it is that I believe Blizzard is tweaking Insect Swarm the way that they are. To start with, Insect Swarm has been an extremely problematic spell ever since it was created. In TBC, it didn't deal enough damage in order to be worth using, the same was even true at the start of WotLK, and it nearly fell off the map again late in the expansion as well. It hasn't been until Cataclysm that Insect Swarm has finally become a sold piece of our rotation, and even now it's still the weaker of the two DoTs.

Blizzard has long struggled to get balance druids to use Insect Swarm, which seems silly when you think about it, but true. In large part this is because the ability wasn't originally designed as a damage dealing DoT, it was a debuffing DoT; the primary purpose was the -chance to hit debuff. Early Cataclysm, however, showed us the dangers when you allow for DoTs to go powerfully unchecked.

Balance druids rocked tier 11. A significant part of that was our horribly powerful tier bonus of the time, but it was also due to the type of encounters that we came across. Balance druid DoTs excelled at multi-target and AoE damage. We rocked face on Cho'gall, Halfus, Maloriak, and more because we could DoT multiple targets with very strong DoTs. This has caused us design problems that still trouble us to this day. Our single target damage has been kept down and not boosted where it needed to be because our multi-target damage is just too good.

Blizzard really wants to avoid that in the future. They don't want balance druids to gain such a large damage boost merely because there's an additional target. This is understandable, admirable even, but they are just going about it entirely the wrong way.

Having Insect Swarm do nothing but boost our damage by 25% against a single target carries a lot of design complications of it's own. The more obvious danger, and the one that I've been harping the most, is the matter of target switching. It happens all the time, there's an add that spawns which needs to be taken down quickly, or you have to switch to an off-target to burst down a shield, there's tons of rapid target switching where burst damage matters. At the end of the day, a single GCD of ramp up isn't that bad when you consider what retribution paladins go through. We could deal with that, if it were our only ramp up.

We already have significant ramp up time built into Eclipse. Yes, we can game it so that we have a full Eclipse bar waiting for when we need to burst down a target, but doing that reduces our damage against the primary target. Eclipse is Insect Swarm, which is why we don't really need a second. Just think of the potential damage swing. I said back in the Cataclysm beta that we would hit a mastery level that would make Eclipse a 40 – 50% or more buff, and, look, we did! You think MoP is going to be any different? Doubtful.

We're still going to hit the same 40 – 50% Eclipse level that we are now, and add on top of that the potential to swing another 25% damage. That's right, if Eclipse and Insect Swarm are both down, you can expect that we'll do 65 – 75% less damage. Oh, but why wouldn't Insect Swarm be up! Perhaps it was dispelled in PvP, perhaps you're attempting to do a quick target switch, maybe you're off soloing and don't want to bother using Insect Swarm on every single mob you pull. Can you imagine that while leveling? How annoying.

As I said, I understand what it is that Blizzard wants to do, but there are far better ways of doing that than turning Insect Swarm into the most bland ability ever -- not to mention how OP it is. Seriously, a spell that just increases your damage by 25% on a target? It's too simple, too boring. Look, we want to restrict balance's access to multi-target damage, I get it, let's look at some better ways to do that instead.

Bringing back my favorite

Every since we got the ability from a tier bonus back in ICC, I have been infatuated with the notion of Languish. When it was shown that our critical strike scaling in Cataclysm was so pitifully low, I pushed to try and get Languish added in as a talent to help boost our want for crit. What is Languish? Oh it was a neat little perk that caused a target to take 7% of Starfire's or Wrath's damage after suffering a critical strike. Essentially, it was our weak version of Ignite. Is it blatant copying? Probably, but I really don't care.

Languish was an amazingly cool tier bonus, and it would be an amazingly cool perk to add into Insect Swarm. Keep the minute duration, keep the single target restriction, give it a modest amount of damage, say half per tick of what it does today, but allow for Starfire, Wrath, and Starsurge crits to cause the target to take an additional 10 – 20% damage. Heck, if you don't want for it to clone Ignite too much, then have the damage be instant instead of being a DoT.

With this solution, you have multiple perks. It reduces Insect Swarm's damage –- it'd be worth it on multiple targets because of the minute duration, but that's why you restrict it to a single target -– and it boosts our critical strike scaling. Changing Shooting Stars to only proc off DoT ticks was a nice incentive to gear for crit, but it wasn't nearly enough. Crit would still be miles behind our other secondary stats just as it is today.

Working with what you have

Don't want the Ignite clone? Fair enough! That's not the only choice that you have in the matter. You could have Insect Swarm act as its own form of mini-Eclipse. Once again, cut the damage of the DoT down, but make up for else where. Every Wrath that lands on a target with Insect Swarm increase Starfire/Starsurge damage by 2%, stacks to 10%, then the reverse for Starfire.

The problem that Blizzard has is they don't want Insect Swarm's damage to be viable against more than a single target. They want moonkin to focus on single target damage and not multi-target damage. This way they can better balance single target and AoE. Mean as it sounds, but their solution is clunky, uninspired, and flawed. There's far better ways to achieve their goal. Why aren't they looking at them?