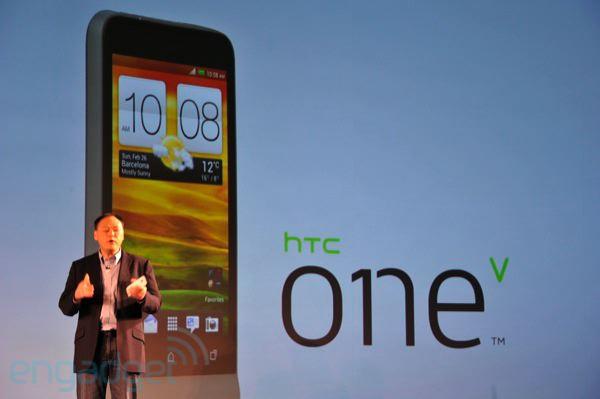 It's not often that device codenames serve as a direct mission statement, but with the outing of the One V, neé Primo, first-timers are getting an entry level HTC-welcome. The Ice Cream Sandwich-laden handset, running a Sense 4.0 overlay, hearkens back to the design of the Legend, with a black-ish gray, aluminum unibody, hardware keys (three for back, home and apps) and prominent chin jutting out below its Gorilla Glass-coated, 3.7-inch WVGA LCD display. The company hasn't specified the exact CPU powering the phone, but we do know it's a 1GHz single-core affair buffered by 512MB RAM. Storage-wise, you're looking at a paltry 4GB onboard that can be augmented via 25GB of Dropbox, or the available microSD slot. Beneath its sealed enclosure lies a 1,500mAh battery, quadband GSM and WCDMA radios, in addition to support for GPS, WiFi and Bluetooth. Directly benefiting from the manufacturer's recently announced ImageChip, is its 5 megapixel rear shooter, outfitted with an AF f/2.0 lens and capable of recording 720p video. There's no front-facing camera to be found on the unit, although situated as it is on the lower end of the consumer spectrum, that's to be expected. Check after the break for HTC's video preview.

In this article: 3.7-inch, Android, Android 4.0, Android4.0, apt-x, aptx, f2.0, HTC, Ice Cream Sandwich, IceCreamSandwich, ImageChip, mobilepostcross, mwc, mwc 2012, Mwc2012, One, One V, OneV, Primo, Sense 3.6, Sense3.6, single-core, video
All products recommended by Engadget are selected by our editorial team, independent of our parent company. Some of our stories include affiliate links. If you buy something through one of these links, we may earn an affiliate commission.
Share
Tweet
Share