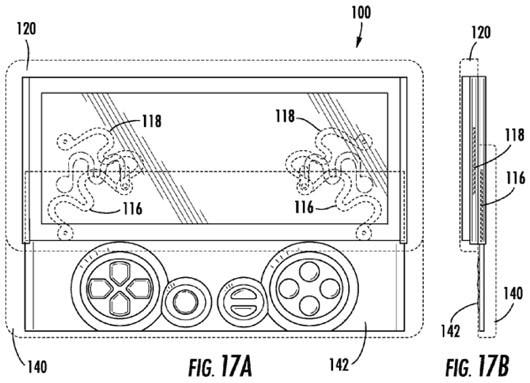 The United States Patent and Trademark Office has assigned Sony a patent for "electronic devices having multiple keypads and related methods," which when translated out of Patentese and into The Queen's English, means "cell-phones with two sliding keyboards and stuff."

The patent application is chock full of ballistically confusing descriptions like "a second slidable unit having a second keypad thereon, the second slidable unit being slidably connected to the upper unit and the first slidable unit," but the basic idea of the patent is fairly straight forward: Rather than having one slide-out keypad like the existing Xperia Play, this device would have two keyboards stacked on top of each other, and the user would decide which to slide out depending on the situation.

Obviously, the most practical application of this tech would be to equip one keyboard with a QWERTY layout and the other with PlayStation controls, but whether or not this patent will get any actual use remains to be seen. With phones getting larger, physical keyboards falling to the wayside and the PlayStation Suite still in beta testing, the chances of Sony taking a risk on a device that's market is slowly waning seems unlikely.
In this article: cell-phone, double-keyboard, dual-keyboard, mobile, patent, sony, sony-ericsson, Xperia-Play
All products recommended by Engadget are selected by our editorial team, independent of our parent company. Some of our stories include affiliate links. If you buy something through one of these links, we may earn an affiliate commission.