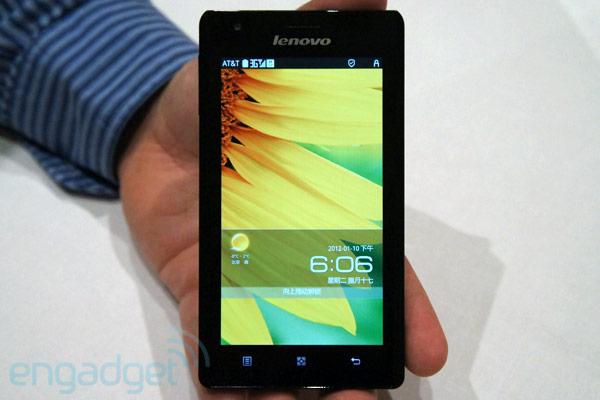 The world's second (or third) biggest PC manufacturer has announced plans to invest $800 million in a new mobile product-centric facility. Lenovo wants to get closely involved with the lucrative world of smartphones and tablets, promising that several thousand employees at the new base in Wuhan will focus on new mobile devices for both China and overseas. Lenovo's pegged to launch the K800, one the first Intel-powered Android phones, at the end of the month, but this marks a concerted effort to advance both its tablet and phone collections -- and offer up more space for those other side projects.

Lenovo Establishes Industrial Base in Wuhan


Beijing – May 7, 2012: Lenovo Group and the Wuhan government today held a groundbreaking ceremony for the establishment of the Lenovo (Wuhan) Industrial Base. The site will include integrated facilities for mobile Internet product R&D, production and sales. The new facility will help drive Lenovo's innovation capability in the field of mobile Internet and optimize its global supply chain, helping the Company to develop and deliver new mobile internet products and bring them to its customers even faster. Total investment over the next five years is expected to be approximately RMB5 billion, and the facility will begin operations in October 2013.

"As an industry leader, we are aggressively moving forward into the PC Plus era, and with our Mobile Internet Digital Home group actively engaged, we are accelerating development in smart phones, tablets, and other mobile Internet terminal markets," said Yang Yuanqing, Lenovo Group chairman and CEO. "We're determined to firmly seize the tremendous opportunities for innovation in this market, so that Lenovo's customers have even more opportunities to own our award-winning products, from PCs to mobile Internet devices. "When it begins operations, the Lenovo (Wuhan) Industrial Base will greatly improve our innovative capability and further optimize our supply chain, giving us a solid foundation to win in a broader market."

The Lenovo (Wuhan) Industrial Base will mainly focus on the R&D, production and sales of smartphones, tablets and other mobile devices that will cover the Chinese and global markets. By 2014 total sales revenue from the industrial base is expected to reach RMB10 billion, increasing to RMB50 billion within the next five years. The facility also has the potential to create nearly 10,000 job opportunities in the coming years, in a variety of related businesses. Included in this number, Lenovo within the next few years expects to employee several thousand R&D and management staff located at Wuhan, focused solely on advancing R&D in mobile Internet devices and application. The Lenovo (Wuhan) Industrial Base will help improve Lenovo's entire supply chain as well as its R&D and marketing systems, by building even more end-to-end product capability.

As the central city supported by China's strategy of promoting the development of central regions, Wuhan hosts the nation's second independent innovation demonstration area after Beijing's Zhongguancun. Wuhan has benefitted from the government's efforts to promote the development of China's central and western regions and has great growth potential, having already attracted investment from many Fortune 500 companies.

At the end of 2011, Lenovo became the world's second-largest PC maker after being the world's fastest growing PC maker for nine consecutive quarters. At the same time, Lenovo's mobile Internet business made significant progress. The company is now a top-three smart phone maker in China with double-digit market share, and the second-place tablet maker with a market share of 16.5%, far ahead of its competitors in the android market.

In this article: China, development, Facilities, k800, Lenovo, lenovo k800, LenovoK800, mobilepostcross, smartphones, tablets, Wuhan
All products recommended by Engadget are selected by our editorial team, independent of our parent company. Some of our stories include affiliate links. If you buy something through one of these links, we may earn an affiliate commission.
Share
Tweet
Share