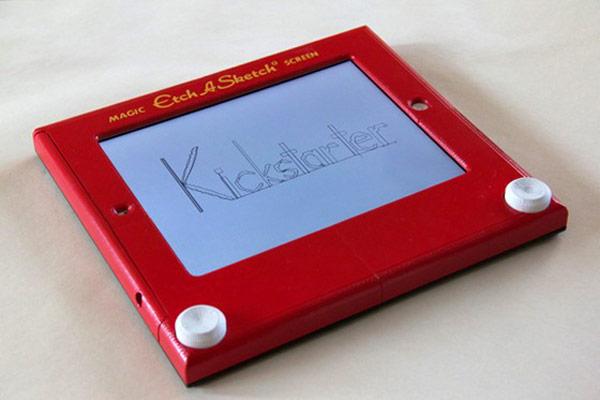 Visions of the iPad as a modern-day Etch A Sketch have so far been primarily decorative: they've been more about remembering youth than recreating it. That's why Ari Krupnik & Associates' officially-sanctioned Etcher iPad case project on Kickstarter stands out. Those knobs? They work, and they're Made for iPad certified. And, as the Etcher is a product of the digital era, your creations in the custom-written app can be saved and shared to Facebook, Flickr or even YouTube as a time lapse video. Shaking the Etcher will still erase your image -- it just doesn't have to disappear forever this time.

Your pledge level determines not only what variety of Etcher case you get, but how much control you get over the project. Committing $45 is all it takes for the nostalgic red, but if you spend $60, $75 or $100, you'll have the additional options for blue or a special backer-only color. Those at the $100 level get to vote on what color they and the $75 pledge-makers will see. A $175 outlay will provide early access to the software development kit as well as a say in what open-source license the code will use. Moving up to $210 or $360 will give you that control as well as an accordant five or 10 Etcher cases. If you like what you see, you have just over a month to contribute and make the iPad drawing add-on a reality.


Previous project update: The previous project, Templeman Automation's Playsurface multitouch table, is just over a tenth of the way towards its $40,000 target. However, it's still young at more than three and a half weeks away from its deadline. If you like the idea of an open alternative to Microsoft's Surface, visit Templeman's Kickstarter page and chip in there as well.