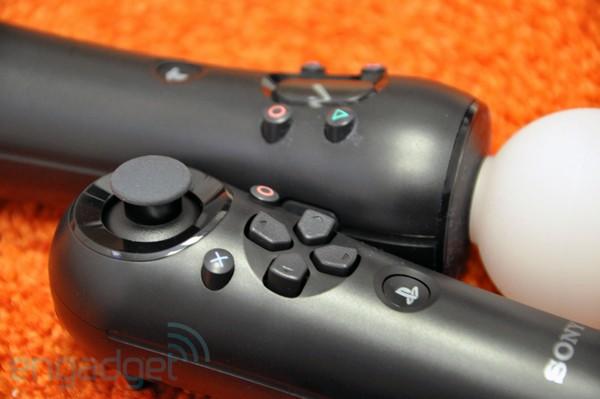 The first time we saw Sony's PlayStation Move, it didn't even have a name: we only knew it as the PS3 motion controller. The newfangled prototype was Sony's response to the success Nintendo found in the Wii, a motion-sensitive "me-too" that hoped to one up the competition with better tracking, more "core" games and a curious glowing ball perched on its top. Its first outing showed a handful of tech demos, flaunting gameplay concepts that we'd eventually see in Sports Champions and Medieval Moves: Deadmund's Quest. Since then, the Move has seen its fair share of exclusive and compatible titles, but none quite engaging enough to make the peripheral a must-have accessory. With the next generation just around the corner and Sony's portable cards already on the table, E3 2012 is looking a little light on the hardware front. If Sony's going to give the Move one final push, now is the time.

How does a two-year-old peripheral keep it fresh? Well, if Microsoft's attitude about Kinect is any indication, it's all in the software. A PlayStation Move push means showcasing the best the wand has to offer at E3, and what better way to speculate about the motion-sensitive lollipop's future than to look at its recent past -- we're talking about Sorcery. As we said, most of the ideas from the controller's 2009 technical demo came to fruition in retail games, but one gem was skipped over for three years: magic. From the very beginning, Sony's E3 press conference evoked the idea of a magic wand, suggesting that the controller's illuminated sphere could match hues to the on-screen wizardry. A novel idea, to be sure, but it didn't actually surface until the firm's 2010 keynote, in a demo of Sorcery. Fast forward to today and the game is finally out, two years later. Does it live up to Kevin Butler's dated promises? Not exactly.

Yes, Sorcery realizes the 2009 suggestion of a magic-spell-powered light-up lollipop, but all games come down to how they play, and this game plays like a run-of-the-mill waggle fest. While the Move's camera does require a bit more direction from the player than generic Wii-like flailing, the game's auto-aim seems to do most of the work. To an extent, this software assist is necessary, but its weak execution robs the player of the notion that they are actually in control of their arcane powers -- aiming the wand directly at an on-screen baddie simply doesn't work. Attacking from the low ground? Players need to fling spells at the empty space above their own head -- rather than at the target itself -- to land a hit. Similarly, targeting enemies on the ground is a exercise in trial and error. This kind of flick-and-flail gameplay is a common pitfall for motion-controlled action titles, to be sure, but it's one the Move needs to overcome if Sony hopes to garner attention this late in the game.

It's hard to put it better than our friends at Joystiq did: "if Sorcery is to act as a Move ambassador, it is not up to the task." With the promises of 1:1 controls, the graphical oomph of the PlayStation 3 and some heavily touted buttons, there's no reason the Move can't still wow gamers – Sorcery simply isn't its avenue for attention. As a title comprised of "classic" motion control elements, it's plenty fun -- it just isn't engaging or innovative enough to push the platform. When gamers think about PlayStation today, Move is the last product on their mind -- if Sony hopes to grandfather motion control into the next generation, that needs to change. E3 may be its last and best shot to do this.

Sony CEO Kaz Hirai already took the PlayStation 4 off of the table for the show and the Vita has been in stores for months, making 2012 a year of software. If Sony intros just one excellent Move title, it just might reel in the attention of folks who aren't sold on Nintendo's tablet-esque wonder. E3 is almost upon us, Sony. Make the most of it.