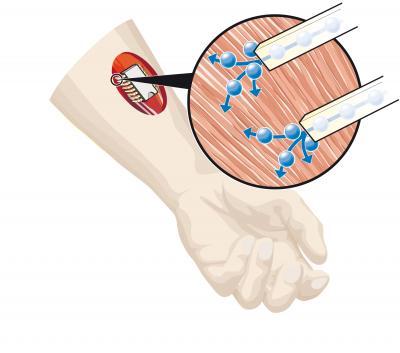 You'd be more than forgiven for not knowing who Klas Tybrandt is. The doctoral student at Linköping University is hardly a household name, but his latest creation may garner him some serious attention. The Swedish scientist has combined special transistors he developed into an integrated circuit capable of transmitting positive and negative ions as well as biomolecules. The advantage here is that, instead of simply controlling electronics, the circuits carry chemicals which can have a variety of functions, such as acetylcholine which the human body uses to transmit signals between cells. Implantable circuits that traffic in neurotransmitters instead of electrical voltages could be a key step in taking making our cyborg dreams a reality. We're already counting down the days till we're more machine than man.

In this article: Acetylcholine, biological circuits, BiologicalCircuits, biomolecules, chemical circuits, ChemicalCircuits, circuits, cyborg, medicine, research, transistors
All products recommended by Engadget are selected by our editorial team, independent of our parent company. Some of our stories include affiliate links. If you buy something through one of these links, we may earn an affiliate commission.
Share
Tweet
Share