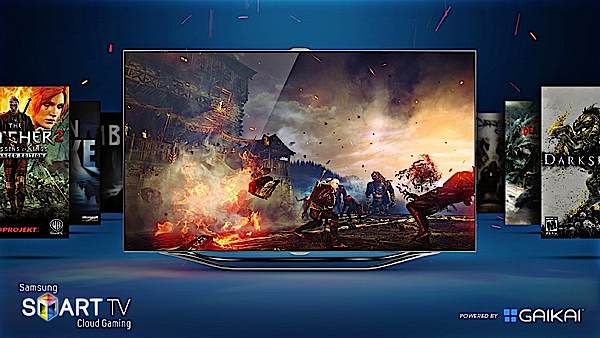 At this point, most people (in the tech world, at least) are quite familiar with Gaikai's cloud gaming platform, which lets users have a not-quite-console quality gaming experience on any device. The technology has found its way onto Facebook and in LG TVs, and now Gaikai's bringing gaming to Samsung TVs, too. Called Samsung Cloud Gaming (SCG), it'll be available via the Smart Hub on Samsung 7000 series and up Smart TVs in the US this summer. The technology powering SCG is the same as what's behind LG's service, but Sammy's customized the UI to suit its sensibilities. We got a chance to speak with Gaikai CEO David Perry about his company's latest partnership, so join us after the break for more.

Update: Video hands-on added after the break. We also demoed the service playing Darksiders, and aside from some mild stuttering the button masher was smooth enough to play using a USB-connected controller. We're told that the software we viewed isn't final, so it may not reflect the final look.

Turns out that the Gaikai / Samsung alliance has been in the works for nine months, and that Gaikai's had its sights set on the Korean tech giant for longer than that. Perry told us that Samsung's status as the largest electronics manufacturer on earth made it the best way to grant large swaths of people access to Gaikai-powered gaming, so naturally, this coupling was always a part of his plans. The arrangement is fairly simple. Samsung's buying dedicated bandwidth from Gaikai's 24 data centers on a per-device basis, with Gaikai handling overflow traffic while it builds out its network to meet increased demand as needed. Still looking for more? You'll find all you can handle in the PR after the break.

Samsung, the largest consumer electronics company in the world, and Gaikai, the fastest cloud gaming service, partner to create the future of video games

Samsung will soon begin accepting signups for the beta of Samsung Cloud Gaming for Samsung Smart TVs in the United States.

"Our vision is to provide the same access to video games that consumers enjoy with TV shows, movies and music. Our research made Samsung the obvious partner to turn this vision into a reality," said David Perry, CEO of Gaikai Inc. "Samsung is the largest TV manufacturer in the world and Gaikai is the industry-recognized fastest cloud-based streaming service for video games. Together, we will turn Samsung Smart TVs into a console-like experience capable of delivering the best-selling video games and other content instantly to consumers – no downloads, no extra hardware, no trips to the store."

"One of Samsung's key strengths lies in bringing brand new technology and entertainment products to our consumers, and adding Gaikai to our Smart TVs delivers both," said Kyung-shik Lee, Vice President, Visual Display Business at Samsung Electronics. "Working together we are proud to bring the biggest blockbuster video games straight onto Samsung televisions, significantly adding to the value of the Smart TV platform, as well as giving digital consumers an entirely new way to try and buy video games from the convenience of their living rooms."

Samsung will utilize Gaikai's open cloud platform to launch game titles directly from the Samsung Smart Hub environment featured in high-end 2012 Smart TVs, beginning with the Samsung 7000 series and up 2012 LED Smart TVs. A diverse selection of AAA content appealing to both families and gamers alike will be available to instantly play using game controllers in combination with the Samsung Smart TV.

Gaikai has spent over three years designing and building the fastest cloud-based streaming service in the world, instantly capable of delivering cutting-edge games without the need for any extra custom hardware or software. Coupled with relationships with the top video game and development partners around the world, Gaikai is capable of delivering a broad catalog of the world's most exciting games straight to consumers across the web, including social networks like Facebook, or on any Internet-connected device, including televisions, set-top boxes and tablets.

In this article: cloud gaming, CloudGaming, David Perry, DavidPerry, gaikai, games, gaming, hands-on, hdpostcross, samsung, samsung cloud gaming, samsung smart tv, samsung smart tvs, SamsungCloudGaming, SamsungSmartTv, SamsungSmartTvs, smart tv, smart tvs, SmartTv, SmartTvs, video
All products recommended by Engadget are selected by our editorial team, independent of our parent company. Some of our stories include affiliate links. If you buy something through one of these links, we may earn an affiliate commission.
Share
Tweet
Share