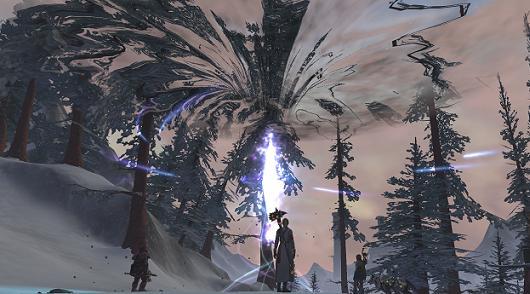 What do a statistician, a tinkerer, a party guy, a time-challenged player, and my better half all have in common? They're a handful of gamers who have recently been playing RIFT with me, and many of them have come back after a break from the game. It's pretty much been one coincidence after another that they've all come back around the same time, and while we all get along swimmingly, we all have differences in our playstyles that make this group a decent representation of the RIFT demographic on the whole. Would the game hook in everyone? Would the second time be the charm? Hear their impressions in this week's Enter at Your Own Rift.

Of all the moments in these past few weeks, one sums things up perfectly. I was in game one night and got a chat ping out of the blue from a guildmate. He wanted to catch up with how everyone was doing, and specifically, which people were playing. I mentioned that we had a few pop back into RIFT, and he immediately replied that he had actually been downloading it while we chatted. This particular guildie is someone who'd made a hobby out of his gaming hobby and at one point in his spare time had created a parse program for RIFT that built upon the Advanced Combat Tracker for EverQuest II. But his gaming time had been scaled down quite a bit because of real-life obligations. Time is at a premium, so when he told me he was done patching, it was time to spring to action. Like something out of Mission Impossible, I first had him log in and transfer to the server to which we had relocated the guild (luckily he didn't have a lot in his mailbox to clean out). In about the amount of time it takes to make popcorn, he was on our server, and a few seconds later, he was already invited and in a group. Meanwhile, a couple of guildmates who had recently returned and were up to the mid-levels also mentored down and queued up with us for an instant adventure (we had a few seconds to tell him to just buckle up and follow us). From there, it turned into a night of lots of fighting, leveling, and looting.

I chatted with him the next day after the whirlwind tour to get his take on mentoring, IAs, and most importantly, his take on the game. He admitted that it was a pretty frenzied pace from the moment he logged in, but he enjoyed the fact that we weren't standing around trying to figure out where to go for old quest updates or dig through old journal entries. As he put it, no one was saying, "What kills do you guys need now?" The experience has also been terrific, and he's been following a "level a day" plan but also doing it on a fairly tight gaming schedule. In short, he's been able to get a decent amount of experience from doing IAs in quick bursts of an hour or so and has had a lot of fun doing it.

That sentiment was echoed by just about everyone in the guild. While my guildies did have old quests in their journals and lots of unfamiliar items in their bags, they could put off housecleaning until later and jump into an IA with some mentored-down friends right away. In addition, it's been a fairly quick path to level 50, which is on everyone's to do list since the expansion is due this fall. My husband found that even after he had outleveled the new lower-level IAs, he could mentor down and still get terrific experience from continuing to run them. He did do some questing, but over the week or two it took to get his Rogue to level 50, a big chunk of the experience came from instant adventures.

One thing I've really enjoyed about the wave of returning players is that everyone's been able to slide up and down the level ladder and do things together. Usually, when a player comes back after a hiatus, you have to pause what you're doing in order to play together and help him get up to speed. That's not the case in RIFT. One day, a few of us mentored down to join a lower-level member and run some random IAs to help him level up, and we were able to get some inscribed and planarite along the way from the daily quest. The next day, a friend in another guild who has played from day one, has several level capped toons, and raids regularly took a few returning players out to Ember Isle to run some onslaughts. We all walked away with loads of planarite, inscribed, and planar attunement experience, which was something we all could use.

After just a few weeks, almost everyone who came back is level-capped, and some are now running expert dungeons and raiding. It didn't feel like a grind to get there, though, and in fact, a couple of them had work, travel, and family trips that kept them offline here and there. It's not so much that the game is easymode; it's just that we're all spending less time standing around looking at quest updates and playing catch up and more time actually doing productive (and fun!) things in game.

So what sorts of things made them grumble? Inventory came up a lot. Even though bag sort helped organize things a bit, many of my friends returned to bags full of stuff that had lost meaning. As one buddy pointed out, she had loads of the consumables from sealing rifts, as well as piles of various essences, and they added a lot of clutter to her inventory. Someone else added that he had several quest items that were taking up space (although a guildmate showed him how he could place them in a row below his quest journal to free up space in his bags).

Another thing that many members wished for was the addition of even more instant adventures. We debated whether having so many would cause the playerbase to thin out too much, but one friend suggested that it would freshen up the "random adventure" category to have more variety. Another said that he'd like to see more mid-level IAs, along with an option for lower-level players to either temporarily mentor up or have a fairly large level range so they could participate even if they were technically too low for the zone. They might not be able to survive alone, but in an army of higher-level players, they could probably survive and participate.

Overall, the past few weeks have been pretty active in guild, and what's really nice to see is that the game changes over the past several months have attracted a variety of player types. One guildie is making a fortune by fishing and crafting feasts and black dye, and low-key activities like these fit perfectly with his busy schedule. Meanwhile, someone else stumbled into a PvP zone event the other day and was instantly hooked. Another guildie is having a great time diving into the data from the SimpleMeter Addon and exploring various soul combinations. (In fact, he was wishing for more roles so he could try a new Ranger soul build). I think he summed things up nicely when he said that there are a lot more choices of things to do in game and there's also a lot of choice in how you progress and gear up. So far, those who have been playing are happy with their experiences, and there's plenty to keep everyone entertained while we wait for the expansion!

Whether they're keeping the vigil or defying the gods, Karen Bryan and Justin Olivetti save Telara on a weekly basis. Covering all aspects of life in RIFT, from solo play to guild raids, their column is dedicated to backhanding multidimensional tears so hard that they go crying to their mommas. Email Karen and Justin for questions, comments, and adulation.
In this article: conquest, enter-at-your-own-rift, fantasy, featured, instant-adventures, karen-bryan, opinion, planar-attunement, pvp, rift, rift-black-dye, rift-feast, rift-fishing, rift-lite, rift-mentoring, rift-planes-of-telara, rift-pvp-zone-event, rvr, simplemeter-addon, telara, three-faction-pvp, three-way-pvp, trion, trion-worlds
All products recommended by Engadget are selected by our editorial team, independent of our parent company. Some of our stories include affiliate links. If you buy something through one of these links, we may earn an affiliate commission.