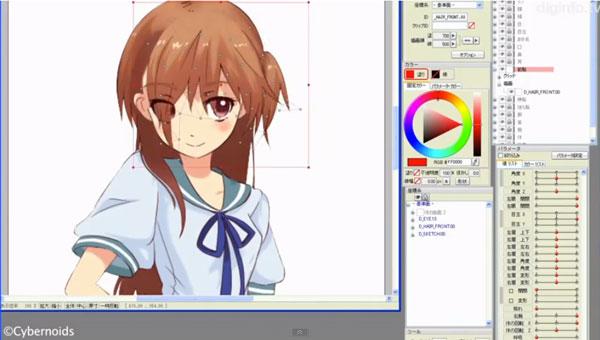 While 3D graphics have been filling our eyes in cinemas and video games way before Nemo ever got lost, we've typically had to settle for computer generated artwork. Live2D from Cybernoids is a drawing technology that hopes to change that. The software lets animators and game creators give hand drawn 2D images rudimentary 3D qualities. In the video above you can see the character turn her head, and the image -- based solely on the 2D version -- twists and adapts in real-time. There are two versions of the software, one based on polygons, and the other vectors, and there is support for consoles and smartphones -- but no details on specifics at this time. The developers admit it's only suitable for limited movement, such as in dialog-based games, for now, but hope to have the tools to handle full 360 degree motions over the next two years. At least, for now, its way way further down on the creep-o-meter scale.

In this article: 2d to 3d, 2dTo3d, 3d, 3d animation, 3d rendering, 3dAnimation, 3dRendering, cybernoids, gaming, hand drawn, HandDrawn, live2d, smartphone, video, visuals
All products recommended by Engadget are selected by our editorial team, independent of our parent company. Some of our stories include affiliate links. If you buy something through one of these links, we may earn an affiliate commission.
Share
Tweet
Share