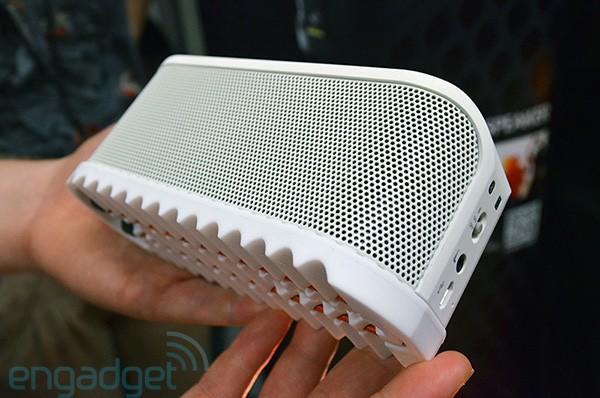 Hey, it's a shoe-themed Bluetooth speaker -- because, hey, why not, right? Jabra announced the punnily named Solemate yesterday, and we happened to run into one on the floor of this year's IFA. It's a small, solid little speaker with a hearty rubber sole that sits on the bottom, protecting the device from shocks and the like. The heel actually peels off, so you can replace it with different colors. Jabra had a slew of brightly colored options aside from the basic black and white, though apparently those won't be widely available at launch.

The pairing process is quite easy -- just flip the Bluetooth button on the side of the device and a glowing blue light will turn on -- not only that, but a friendly device will walk you through the process. Find the speaker on your device's drop down menu and you're good to go. As for the sound, it's surprisingly loud (120dB, to be exact). We walked off the show floor for a second to demo it, but it turned out we didn't need to. Oh, and when you're using a non-Bluetooth device, there's a wired connection that lives on the bottom of the sole that you can pull out.

All in all, it's a really solid and nicely built speaker -- and for its $200 asking price, we'd certainly hope so. The speaker has big volume buttons on the top and a carrying loop on its side. It also comes with a small black bag, which it can actually play through without dampening the sound too much. It'll hit the US on September 2nd, but you can pre-order it now, if you're eager. 11
In this article: bluetooth, bluetooth 3.0, bluetooth speaker, Bluetooth3.0, BluetoothSpeaker, hands-on, ifa 2012, Ifa2012, jabra, jabra solemate, JabraSolemate, solemate, video
All products recommended by Engadget are selected by our editorial team, independent of our parent company. Some of our stories include affiliate links. If you buy something through one of these links, we may earn an affiliate commission.
Share
Tweet
Share