Raindrops on roses, Lightning adapters, and whiskers on kittens

iPhone 5 doesn't come with a free 30-pin adapter, video out adapters on the way 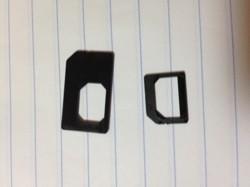 The iPhone isn't expected to hit retail shelves until late this month (the announcement event will occur on September 12th) but its new nano-SIM cards may already be shipping, according to the International Business Times. TUAW wrote about similar shipments in a post earlier today.

Nano-SIMs offer a smaller SIM format using a new standard that was just finalized this Spring. According to part leaks, the next iPhone will use nano-SIMs.

Micro-SIM Shop, which we've covered in the past, is now offering adapters for the new nano size. Adapters allow you to stick a working SIM into a plastic cradle for use in older units. This is great for when you're going on trips and would rather not take along your most modern unit.

As with the earlier items I tested, these were quite sturdy -- stiffer than you'd think and sized perfectly to fit into iPhone 4S / 4 (smaller) and 3GS SIM (larger) slots. The adapter places the SIM connectors at the right place so the older iPhones and iPads can read them.

Micro-SIM Shop is selling the nano adapters for €3 for one or €11 for five. Shipping worldwide costs €3.

In this article: adapters, microSIM, nanoSIM, SIM
All products recommended by Engadget are selected by our editorial team, independent of our parent company. Some of our stories include affiliate links. If you buy something through one of these links, we may earn an affiliate commission.