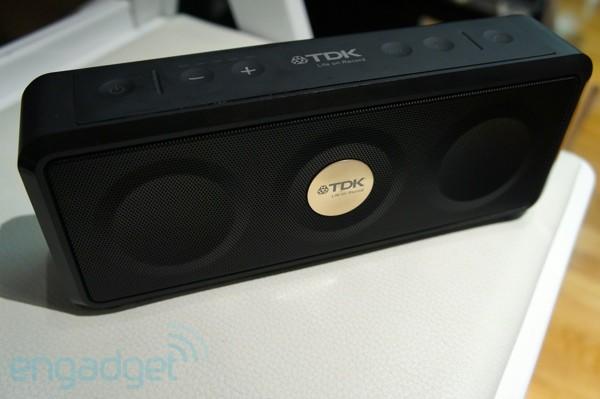 Back at IFA we spent most of our time handling new tablets and Win 8 devices, but, given that the show has grown into something of a mini-CES, there was news in almost every product category, portable audio included. TDK announced a trio of speakers that week, and though we didn't get hands-on in Berlin, we got a second chance tonight at a New York City press event. In particular, the company is showing off its first ruggedized product, the Wireless Weatherproof Speaker. As you can see in those photos down there, it has all the stylings of a run-of-the-mill portable speaker, except it also happens to be IP64-certified against the elements. When TDK talks about its durability, it talks about liters of dousage, so a splash on your next beach vacation shouldn't be an issue.

As for audio, it has two speakers up front, a subwoofer and two passive radiators 'round back. TDK declined to clarify the wattage, but we'll say this: the little guy is powerful enough that we could hear it over the din at Pepcom, a local press event. And, TDK had a larger, more powerful speaker playing nearby, and we still had no problem hearing the song coming from the weatherproof model. Granted, then, this was hardly the best scenario to evaluate audio quality, but we did sense that the treble was a bit trapped compared to the bass, which came through loud and clear. Lastly, there's a rechargeable battery inside, which TDK rates for up to six hours of runtime. It'll go on sale in late October for $250, but in the meantime help yourself to some first-hand shots below.

In this article: bluetooth, bluetooth 2.1, Bluetooth2.1, hands-on, IP64, speaker, speakers, TDK, TDK Wireless Weatherproof Speaker, TdkWirelessWeatherproofSpeaker, weatherproof, wireless speaker, wireless speakers, WirelessSpeaker, WirelessSpeakers
All products recommended by Engadget are selected by our editorial team, independent of our parent company. Some of our stories include affiliate links. If you buy something through one of these links, we may earn an affiliate commission.
Share
Tweet
Share