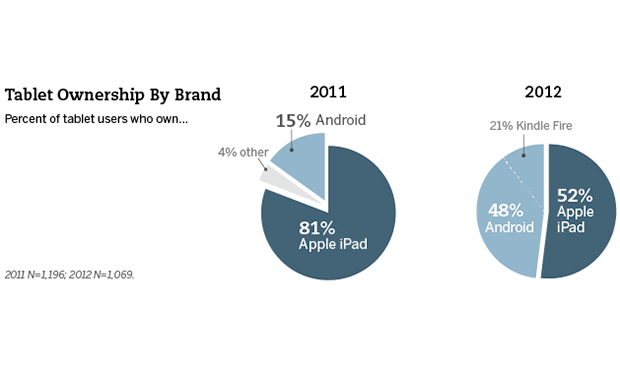 It shouldn't come as much of a surprise that more Americans than ever now own tablets, but if you'd ever wanted some quantifiable data to go along with that homespun wisdom, then the Pew Research Center is glad to help. According to its latest report, 22 percent of US adults now own a tablet of some form. While the iPad remains the dominant player in the space with a 52 percent market share, this figure starkly contrasts the 81 percent share that Pew reported in 2011. As you might expect, Android tablets have made significant inroads and now account for 48 percent of the overall tablet space. Leading the Android charge is the Kindle Fire, which alone accounts for 21 percent of all tablets sold. It's worth pointing out that Pew's survey was conducted before the release of either the Nexus 7 or the Kindle Fire HD, which means that even the most recent information is a bit behind the curve. You'll find a press release after the break that provides a much broader take on Pew's latest findings in the mobile space, but those who want to go straight to the meat should hit up the source link below.

New Study Finds Half of U.S. Adults Have Mobile Internet - With Big Implications for News

October 1, 2012-The percentage of Americans who have mobile internet access has risen dramatically in the last year, a trend that is rapidly changing how people get news and the implications for how to finance it, according to a new, detailed survey of news use on mobile devices conducted by the Pew Research Center's Project for Excellence in Journalism (PEJ) in collaboration with The Economist Group.

The study is based on a survey conducted from June 29 to August 8 among 9,513 adults including 4,638 mobile device owners. The survey updates trends from a comprehensive, first-of-its-kind study of news consumption habits on tablets conducted a year ago by both organizations.

Nearly a quarter (22%) of adults now own some kind of tablet computer, double the number a year ago (11%), and smartphone ownership is up nine points, from 35% to 44%. As a result, half of all Americans (50%) now have mobile internet access through either a tablet or a smartphone.

Fully 64% of tablets owners and 62% of smartphone owners say they use the devices for news at least weekly, according to the survey. And a third of all U.S. adults now get news on a mobile device at least once a week. And Americans are doing more than just clicking headlines on their mobile devices: 73% of adults who consume news on their tablet read in-depth articles at least sometimes, including 19% who do so daily.

"Even with the broadening population and wide range of competing activities, mobile owners are drawn to news on their tablet and smartphones," said PEJ deputy director Amy Mitchell. "The evidence is also mounting that mobile devices are adding to, rather than replacing, how much news people consume," said Mitchell. In all, 43% of tablet news users say their tablets are adding to the amount of time they spend with the news and 31% say they are getting news from new sources they didn't use before.

At the same time, consumers are not yet taking advantage of all the aspects of mobile technology. For instance, while mobile devices would allow people to get news wherever they are, most people use their tablets and smartphones for news at home, and usually just once a day.

"There are a variety of activities one can do on a mobile device today," said Paul Rossi, managing director and executive vice president of The Economist Group, Americas."However, even with all those options, reading is still one of the most popular activities. With more people than ever before using these devices, this clearly represents an incredible opportunity for publishers across the country."

Just over half, 52%, of tablet owners report owning an iPad, compared with 81% a year ago. Fully 48% now own an Android-based device, including two in ten, 21%, who own a Kindle Fire.

Rather than replacing old technology, the introduction of new devices and formats is creating a new kind of "multi-platform" news consumer. More than half, 54%, of tablet news users also get news on a smartphone; 77% also get news on a desktop/laptop and 50% get news in print. What's more, 25% of get news on all four platforms.

Two distinct news audiences have emerged on tablets-new-found digital customers and those who originally turned to that outlet in print form and are still loyal to the print product. Nearly a fifth of mobile news users, 19%, have paid for a digital news subscription of some kind in the last year, and a third of tablet news users with digital subscriptions have added them since they acquired the device. But even more mobile news users, 31%, have print-only subscriptions, and three quarters of these have no plans to give them up. These print subscribers also prefer their app-based news to be more like a traditional reading experience rather than to have high-tech features. For the news organizations, this brings both the potential for new audiences as well as the challenge of accommodating the differing styles and approaches of these distinct audiences.