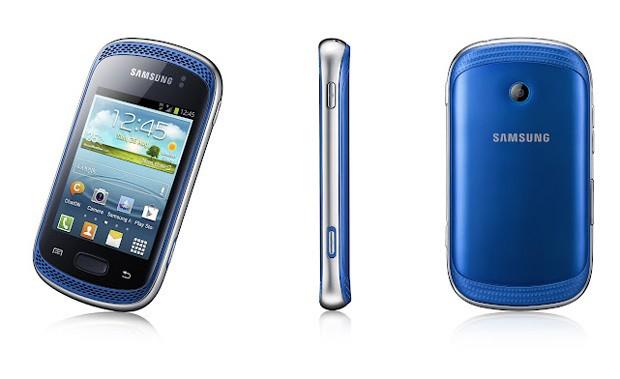 When we first saw the name "Galaxy Music" in a Samsung press release a few weeks ago, we totally overlooked it among all the other budget Galaxy spin-offs. Now that it's official, the Galaxy Music (or equally the dual-SIM Galaxy Music Duos variant) turns out to be just that -- with Android 4.0 running on a low-res three-inch touchscreen and an unnamed processor. On the other hand, the handset does have some features that may be of interest to those who use their smartphone mainly for tunes (if not to full-blown audiophiles): there's a microSD slot for cheap storage, out-of-the-box compatibility with FLAC, OGG and many other file types, Sound Alive and SRS audio modes, a dedicated music player button, plus dual frontal speakers and a WVGA projector for sharing the love. Full specs at the source link.

Update: It's been sensibly pointed out there isn't much room for a projector on this handset, judging from the pictures above. Although the Samsung spec sheet lists one, and even its brightness, we're going to treat that spec as doubtful until it's proven otherwise.

In this article: android, budget, dual-sim, galaxy, galaxy music duos, GalaxyMusicDuos, google, minipost, mobilepostcross, mobilepostmini, music, samsung galaxy music duos, samsung galaxy s iii, SamsungGalaxyMusicDuos, SamsungGalaxySIii, speakers
All products recommended by Engadget are selected by our editorial team, independent of our parent company. Some of our stories include affiliate links. If you buy something through one of these links, we may earn an affiliate commission.
Share
Tweet
Share