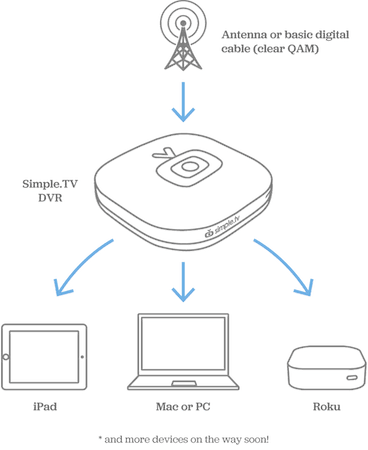 The Kickstarter success known as Simple.TV had let it be known that units would start showing up at backers' doorsteps around October 10th-15th, and now those who happily invested on the project will be pleased to know the company's doing just as it promised. Meanwhile, folks who were late to the Kickstarter shindig can still grab a simplified video streamer for themselves via the outfit's site, where a Simple.TV Limited, Premier and Lifetime can be found for $149, $199 and $299, respectively. In case you need a quick refresh, the Simple.TV puck will let users watch and record live TV, which can then be easily streamed to a variety of devices -- including, as you can see above, an iPad, Mac or PC as well as Roku boxes. You'll find more info on what bundle is best suited for you at the source link below.

In this article: connected tv, ConnectedTv, DVR, hdpostcross, hdpostmini, Kickstarter, Kickstarter.com, minipost, ota, over-the-air, Simple TV, Simple.TV, SimpleTV, streamer, streaming, video streamer, video streaming, VideoStreamer, VideoStreaming
All products recommended by Engadget are selected by our editorial team, independent of our parent company. Some of our stories include affiliate links. If you buy something through one of these links, we may earn an affiliate commission.