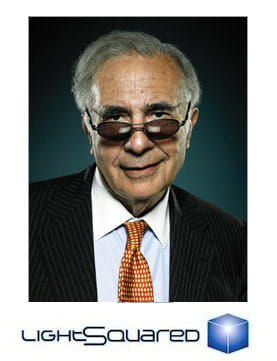 Oh, the twisted web that continues to weave itself around LightSquared. After incurring a seemingly endless parade of regulatory and industry obstacles, the Philip Falcone-backed network is now facing yet another potential hurdle. Except this time, it's taken the shape of investor Carl Icahn: a business magnate notorious for swooping in on downtrodden companies (see: Time Warner) and seizing control. And it appears the old man's pulled out his tried-and-true bag of tricks, securing a sizeable chunk of the fledgling 4G operation's debt following a value drop last year. What does this spell for Falcone? Well, the move could wind up positioning Icahn as a controlling force, steering the LTE operation away from its hedge fund founder's vision and into more profitable waters -- a welcome turn of events for the cash-strapped company. With FCC approval still pending, Sprint quietly retreating from its partnership deal and a looming fight for executive control, it's safe to say LightSquared's troubles have only just begun.

Source: Wall Street Journal
In this article: 4G LTE, 4gLte, Carl Icahn, CarlIcahn, debt, LightSquared, LTE, Philip Falcone, PhilipFalcone, takeover
All products recommended by Engadget are selected by our editorial team, independent of our parent company. Some of our stories include affiliate links. If you buy something through one of these links, we may earn an affiliate commission.
Share
Tweet
Share