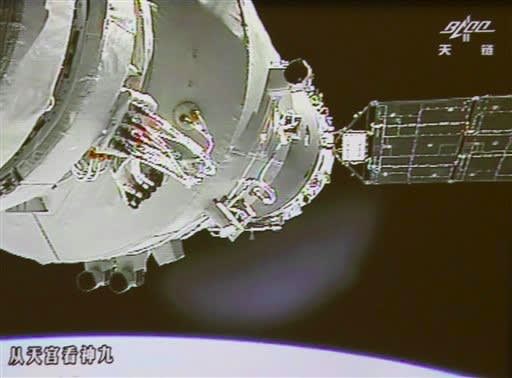 Looks like China continues to add to its space cred after recently joining the rarefied ranks of countries that have successfully docked craft in the final frontier. Fresh off from the recent joining of the Shenzhou 9 capsule with the Tiangong 1 orbiting module, China's three astronauts have now replicated the feat manually, according to the Washington Post . For the uninitiated, the first docking was done via remote control from the ground. The mission has had plenty of firsts for China so far, including the country's first female astronaut. It also serves as a precursor to establishing China's first permanent space station, a 60-ton facility that's about a sixth of the size of the International Space Station but is slightly bigger than NASA's old Skylab. 'Cause sometimes, you just gotta have your own space in space, you know?

Source: Washington Post
In this article: china, docking, science, shenzhou 9, shenzhou-9, Shenzhou9, space, space craft, space exploration, space flight, space station, space travel, SpaceCraft, SpaceExploration, SpaceFlight, SpaceStation, SpaceTravel, tiangong 1, tiangong-1, Tiangong1
All products recommended by Engadget are selected by our editorial team, independent of our parent company. Some of our stories include affiliate links. If you buy something through one of these links, we may earn an affiliate commission.
Share
Tweet
Share