Lenovo IdeaTab S2109 review: a budget-priced ICS slate with a few too many quirks 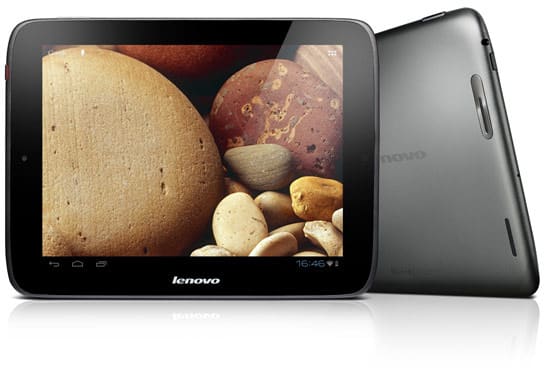 Lenovo got the memo: it's high time the company released a new tablet. With products from Acer, ASUS and Samsung keeping us plenty busy these last few months, Lenovo can hardly expect to stay relevant with the IdeaPad A1 and ThinkPad Tablet from 2011. So the IdeaTab S2109, a $350, 9.7-inch slate running Ice Cream Sandwich, comes in the nick of time.

That's not to say we were surprised when the tablet launched in June. The S2109 made its grand debut at the FCC in March, and Lenovo teased its arrival with a YouTube video highlighting the 8.9mm-thick unibody shell and the 1,024 x 768 IPS LCD display. What the company wasn't so quick to point out, though, was that this device packs a TI OMAP 4430 CPU rather than the Tegra 3 processor that's quickly becoming the new tablet norm. So how does the performance stack up? Does this go toe to toe with all those other mid-range, 10-inch slates we've seen lately? Let's take a look. The Lenovo IdeaTab S2109 offers a clean build of Ice Cream Sandwich in a light and comfortable package, but its sluggish performance and short battery life dampen our enthusiasm.

Be the first to review the IdeaTab S2109?
Your ratings help us make the buyer’s guide better for everyone.
Write a review

The IdeaTab S2109 looks and feels smaller than a 9.7-inch slate due to its curved edges and 8.9mm-thick (0.35 inches) unibody build. It weighs a manageable 1.28 pounds (that's lighter than the 1.4-pound 2012 iPad), which makes the ergonomic design even easier to appreciate. And though Lenovo doesn't stray from the tried-and-true tablet formula -- let's face it, most products in this category are variations on the same theme -- the S2109 is notably sleek, especially considering the price. However, it picks up fingerprints almost instantly, and we noticed that it suffered a few scratches after just a day of commuting and using it indoors. Lenovo does include a textured silicone cover, though, which makes the device easier to grip and does a good job protecting it from scuffs.

You'll find the familiar Lenovo logo on the bezel, and a 1.3-megapixel front-facing camera sits to the left of the display. The volume rocker rests on the top edge, while the power connector, micro-USB, micro-HDMI port and microSD card slot line the tablet's right side. The bottom edge is completely bare, while the left hosts the mic jack and power button. On the back you'll find four SRS surround sound speakers, along with the Lenovo logo situated dead-center.

About those speakers: while music and dialogue in YouTube clips and on Netflix sounded clear, audio doesn't get very loud. There's plenty of volume for headphone listening, but the speakers don't pack enough punch to fill a medium-sized room. And even if you mute the tablet's audio, you'll still be treated to a very loud refrain each time you cold-boot into Ice Cream Sandwich.

Lenovo chose an IPS display for its IdeaTab 2109, and the 1,024 x 768 panel offers wider viewing angles than standard LCD tablet screens. On YouTube, 720p video looks crisp and clear, with bright colors. Images aren't as vibrant as on the Acer Iconia Tab A700 (which boasts a 1,920 x 1,200 display) but they're far from dull or washed-out. And thanks to IPS technology, the 2109's panel gives you far less glare than the A700 and other tablets with standard LCD displays.

The IdeaTab S2109 runs Android 4.0 Ice Cream Sandwich -- and, unlike with past Lenovo tablets, it's a very clean build. Here, you won't find a conspicuous app launcher or a redesigned version of the clock and settings menu. Just the standard five home screens and the Back, Home and Recent Apps icons, all sitting in their usual spot along the System Bar. Swiping through the home screens and launching apps feels brisk and smooth -- but we'll get into more details in the performance section below.

Unlike the slew of new tablets packing quad-core Tegra 3 CPUs, the IdeaTab S2109 runs a dual-core TI OMAP 4430 processor with 1GB of system memory. Unsurprisingly, Lenovo's slate trails its NVIDIA-powered competitors on benchmark tests. In Quadrant, which measures CPU and graphics performance, the S2109 scored 1,885, which falls far behind the marks set by Tegra 3-running tablets such as the Toshiba Excite 10 (4,016). It fared a bit worse than other dual-core tablets, too: The Samsung Galaxy Tab 2 10.1 and the Acer Iconia Tab A200 notched 2,602 and 2,053, respectively.

Cold-booting into Ice Cream Sandwich took 50 seconds, which is a test of patience, even if it's not an unheard-of startup time. In general, while we experienced few serious glitches like app crashes, we often found ourselves tapping our fingers waiting for the tablet to load content on web pages and the like.

Navigating the tablet's Android 4.0 interface is smooth: no noticeable lags when launching apps and the like. But when it comes other tasks like web browsing, the IdeaTab S2109's performance betrays the modest TI OMAP processor under the hood. Loading Engadget's full desktop site took as little as five seconds and as much as 10, and loading the New York Times home page took a painful 43 seconds. When we scrolled through our photo-heavy feed on Tumblr, the IdeaTab S2109 paused frequently, only letting us advance a bit down the page before stopping to load more images. Still, with seven apps running in the background, a video streaming on YouTube, and a few tabs open in the browser, the IdeaTab didn't stutter or force-close any apps.

It's also worth mentioning that the IdeaTab has an extremely responsive accelerometer. While we appreciate not having to wait for the screen to adjust its orientation when we flip the tablet, it often interprets slight movements as a cue to jump from landscape to portrait mode. In short, you'll probably want to turn automatic screen orientation off.

When it comes to battery life, this tablet's 6,720mAh Li-Polymer power pack is hardly a long-distance runner. On our rundown test, it lasted six hours and 53 minutes, one of the poorest showings from a 10-inch tablet we've ever recorded. Lenovo rates the S2109 for 10 hours of video playback, and while reality paints a slightly different picture, it's not like you'll need the power adapter on standby at all times.

The S2109 features a front-facing 1.3-megapixel camera capable of recording video in 720p, and there's no rear-facing shooter to speak of. While many users ignore their tablets' photo-taking abilities altogether, having two cameras on board is pretty standard nowadays. Still, it's important to keep in mind that this isn't exactly an unprecedented move on Lenovo's part: the $350 Acer Iconia Tab A200 doesn't have a rear camera either.

When we called a friend over Skype, she said we looked pixelated, and both video and sound dropped off a few times. Another quibble: the camera's placement, on the left side of the tablet, is quite awkward. During calls we often obscured the lens by accident, since it feels natural to hold the tablet in that spot where the camera is located.

What other products come to mind when you think about 9.7-inch tablets? Not too many, we realized. The form factor surely isn't as prevalent as the standard 7 or 10.1 inches. Of course, the iPad has a 9.7-inch display, and Cupertino's lawyers might as well have copyrighted that shape given how few devices share its dimensions. (There was also the HP TouchPad, but now we're just reminiscing.) Spec-wise, one of the IdeaTab S2109's closest competitors is the iPad -- specifically, the discounted iPad 2. It, too, sports a 9.7-inch, 1,024 x 768 display and runs a dual-core processor, and it starts at $399 for the 16GB, WiFi-only version. You also get a rear-facing camera and nearly 10 and a half hours of battery life. But we suspect you're in it for the Android, so let's move on to some other options running ICS.

If you're looking to stay south of $400 with your new tablet purchase, you'll be looking at far more dual-core contenders than Tegra 3 tablets, but there are a few notable exceptions. One is the ASUS Transformer Pad TF300, which, for $379, gives you NVIDIA's quad-core processor, 16GB of storage and a 1,280 x 800 display. At 1.39 pounds, the TF300 weighs a bit more than the S2109, and you'll have to shell out an extra $150 if you want the keyboard dock, but this is still a great mid-range bet. If screen size is negotiable for you, also consider the Nexus 7, Google's new Tegra 3 tablet with an approachable $200 price. It sports a 7-inch, 1,280 x 800 IPS panel and runs the latest version of Android, Jelly Bean.

Provided you can part with $50 more, the 10-inch Acer Iconia Tab A510 is also a strong candidate. For $450 (for 32GB of internal storage), you get strong Tegra 3 performance, more than 10 hours of battery life and a lightly skinned build of Android 4.0.

You could do a lot worse than the Lenovo IdeaTab S2109. For $350, you get a comfortable, lightweight design, an IPS display with good viewing angles and a clean build of ICS. Sure, you're sacrificing Tegra 3 power and a higher-res panel, but those specs usually entail a steeper price anyway.

Still, while the IdeaTab is hardly a bad product, we found ourselves getting irked at the device a little too often. There's not one huge, glaring reason to stay away; no, it's the combination of a middling CPU, unimpressive battery life and design quirks such as an overzealous accelerometer and an awkwardly placed webcam. All that adds up to an experience that leaves us wanting more. And more you deserve, dear reader. Thankfully, with great slates such as the Transformer Pad TF300 and the Iconia Tab A510 priced just slightly higher (and the 16GB Nexus 7 at $100 less), you won't have to adjust your budget to get it.

In this article: 9.7 inch, 9.7-inch, 9.7Inch, Android, Android 4.0, Android tablet, Android tablets, Android4.0, AndroidTablet, AndroidTablets, Google, Ice Cream Sandwich, IceCreamSandwich, ICS, IdeaPad, IdeaPad S2109, IdeapadS2109, Lenovo, Lenovo IdeaPad, Lenovo IdeaPad S2109, Lenovo S2109, LenovoIdeapad, LenovoIdeapadS2109, LenovoS2109, review, S2109
All products recommended by Engadget are selected by our editorial team, independent of our parent company. Some of our stories include affiliate links. If you buy something through one of these links, we may earn an affiliate commission.