Engadget takes a ride on the Faraday Porteur e-bike 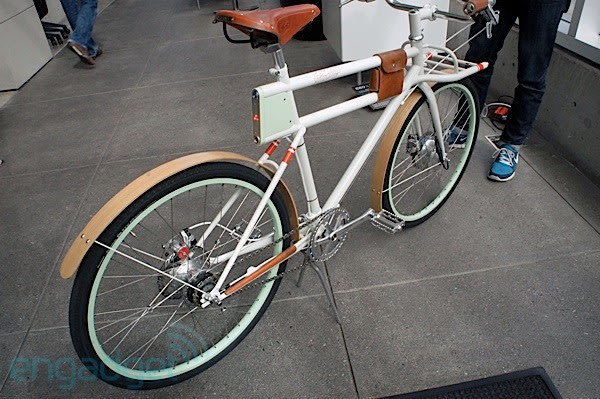 We've watched as Faraday Bicycles' first offering, the Porteur electric bike, went from award-winning concept to a fully-fledged consumer product courtesy of Kickstarter. Recently, company founder Adam Vollmer offered us the chance to ride one, and naturally, we couldn't wait see it for ourselves and put feet to pedals.

First impressions are important, a fact of which the folks at Faraday are clearly aware. The Porteur's white frame, wood fenders, and sea foam green trim pieces and rims provide a pleasing visual counterpart to the leatherwork adorning the seat, frame and handlebars. Add in the yesteryear script of the logo and vermilion detailing work, and it's retro done right -- visually arresting without being gaudy. As is often the case, the coolest bits of the bike reveal themselves upon close inspection. We're fans of the leather pouch (for holding smartphones or other sundries) nestled between the parallel top tubes and chain stay guard embossed with the Faraday name. And, the addition of the company slogan claiming it's "the ultimate electric propelled utility bicycle" along with each bike's production number is a nice touch. But enough about its good looks, how's the thing ride?

In a word, well. But, before we give you our full impressions, a quick disclaimer is in order. We rode two bikes: a prototype mule with an operational electric powertrain, and the battery-free production model you see in our gallery of photos. We did get to ride that lovely bike, but we did so using human power only. We were disappointed not to get the full production model experience, but were still impressed with Faraday's e-assist system during our ride.

When you first start pedaling the Porteur, you receive little-to-no assistance from the lithium ion cells lurking within the frame, but as you pick up your pedaling cadence, the power delivery increases. That's due to some custom algorithms Faraday developed to give riders a smooth, virtually seamless transition into power-assisted cycling. So smooth is the system, that we had trouble pinpointing exactly when the bike started giving us a helping hand. That's the beauty of the Porteur, you're hardly aware that the bike is pushing you along until you're zipping around at 20mph with minimal physical exertion. It feels as if you're riding with a constant, hefty tailwind or are cruising down a small decline at all times -- it's a sensation that we could certainly get used to whenever taking human-powered two wheeled transport. While the production model we rode wasn't powered, we still found it to be a slick set of wheels. The steel frame has zero flex, and was surprisingly lightweight (we easily picked it up with one hand) though the batteries will, of course, result in some significant weight gain. Aside from that, the Shimano Alfine hub shifts flawlessly and overall, the Porteur was a pleasure to ride.

What's next for Faraday? Well, while the Kickstarter campaign's been a resounding success thus far, Adam told us he would like to build a companion app to go with the e-bike. The app would allow users to tweak power-delivery settings and customize taillight blinking patterns, while also providing info about nearby cycling routes and bike shops certified to provide Porteur maintenance. Problem is, app developers don't come cheap, so Faraday needs almost triple the funding it has now. If you're interested, you can head on over to the Kickstarter page, where backers will be able to vote on its features as the app is designed, and receive the app free of charge once it's finished.

Coverage: Kickstarter
In this article: adam vollmer, AdamVollmer, bicycle, bicycles, bike, bikes, e bike, e-bike, EBike, electric bicycle, electric bike, ElectricBicycle, ElectricBike, faraday, faraday bicycles, faraday porteur, FaradayBicycles, FaradayPorteur, hands on, hands-on, HandsOn, ideo, rock lobster cycles, RockLobsterCycles
All products recommended by Engadget are selected by our editorial team, independent of our parent company. Some of our stories include affiliate links. If you buy something through one of these links, we may earn an affiliate commission.
Share
Tweet
Share