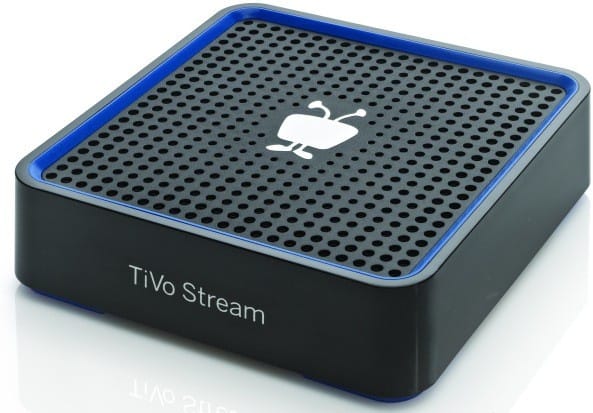 Back when we first reviewed the TiVo Premiere for iPad app, there were folks who complained about not being able to stream content. It seems, though, that TiVo was one step ahead of us: back at CES the company teased a transcoder -- a device that would later be known as the Stream. As its name suggests, this little box streams recordings from your TiVo Premiere to as many as four iOS devices with the help of your local network. You can also use it to transfer shows for on-the-go viewing. So is it worth the additional $129? Let's find out.

The TiVo Stream works as advertised, but seems more like a feature that should be built into the DVR, as opposed to a standalone $129 accessory.

How would you rate the Stream?
We want to hear what you think. Post a quick review now to join the conversation!
Write a review

The TiVo Stream is a simple little box with only a single status light and two connections 'round back. For most consumers, size matters and indeed, this box is about on par with the Apple TV and Roku's box. Instead of inputs and outputs, this little guy has a wired network jack and a power connection. There's no built-in WiFi or any other wireless radio, such as Bluetooth. Seriously, there's nothing else. This means you can plug it into your network anywhere you please, which can be right next to your TiVo or on the other side of the house. If you happen to have a TiVo Premiere XL4 that's connected to the network over MoCA, then the Stream can connect to the free network port on the back of the Premiere. (This is how we tested it.) All told, it's a foolproof setup, and we wouldn't be surprised if this functionality trickled down into the next generation of TiVo DVRs as well.

As usual, the software is where the magic happens and in this case it's all on your phone or tablet. For now, that means iOS only, but we're assured support for Android is in the works, but no word as to when. Thankfully, at least, you don't need to download a standalone app just for streaming; you'll only need to update the existing TiVo Premiere for iOS app. After you launch the app, it quickly discovers the Stream on your network, configures itself and does a quick test. Then, once you select a show, you'll see a "Watch on iPad" button along with the rest of the options. There's also a new tab under My Shows listing what you've transferred to the device. User interface elements aside, the TiVo Stream does just what it sets out to, but with a few quirks. The first is that it only streams recordings, so selecting "Watch on iPad" while browsing the guide is tantamount to starting a recording on the fly. That means it takes about eight seconds to start streaming, whereas it would take less time to begin streaming something that was already recorded. That isn't a big deal, but it is a bit odd when a show ends and the next one doesn't begin. Also, this setup requires a bit of extra cleanup afterwards if you like keeping your list of recordings tidy. If you try to watch a live show when all the tuners are in use, you'll see the same conflict resolution screen as on other TiVo products -- the same one that's optimized for a dual tuner DVR, even if you have the four-tuner XL4. Of course, if you try to watch something that was previously recorded, it just works as expected and we have to say on this count that the picture quality and responsiveness of the playback controls are both excellent. If you watch half of a show on the big screen and want to finish on the iPad, or the other way around, resume works as expected.

The TiVo Stream works as advertised, but seems more like a feature that should be built into the DVR.

Streaming shows from the TiVo is the device's primary function, but that's not its only trick: you can also transfer shows (marked Copy Freely) to your phone or tablet to watch on the go. What can we say? It's pretty straightforward: just select a recording and then hit "Download." You can choose between standard and high quality, which works out to 600MB or 1GB for a one-hour show, respectively. Transferring a 30-minute show in standard quality took about 10 minutes and a high-quality recording clocked in at around 13 minutes. Good thing too, as the app won't download while in the background, but it does keep the device from turning off automatically.

As you'd expect, the difference in quality between the two is noticeable, with high looking like real HD and standard showing visible compression artifacts. Of course, considering the limited available space on many devices, the quality is a small price to pay if it means having room for your favorite show. Downloading a show instead of streaming it means the transport controls are much more responsive, but the downside is that you can't resume on the TV where you left off on the iPad. Just another small price to pay to catch up on your favorite shows when you aren't home. The download feature is especially necessary since the TiVo Stream will only work with devices connected to your home network, which means it doesn't completely replace something like a Slingbox. Then again, a Slingbox isn't very useful if you don't have a decent internet connection -- say, in a plane or at a hotel.

The TiVo Stream works as advertised, but seems more like a feature that should be built into the DVR, as opposed to a standalone $129 accessory. If you're a TiVo Premiere owner and just want to be able to stream your favorite shows on your phone or tablet while around the house or transfer the occasional show to help you keep up with your novellas on the road, then we can't think of a better fit. On the other hand, this seems like a steep price to pay when you consider all the other ways to stream and download shows to your devices -- after all, $129 will buy you plenty of shows through iTunes or Google Play.