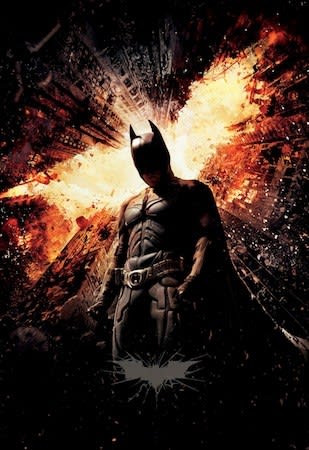 Good for over $1 billion at the box office, Christopher Nolan's third Batman movie is probably this year's most anticipated home video release (The Avengers next week may have something to say about that) and now Warner Bros. has given us a trailer for The Dark Knight Rises on Blu-ray. Previous movies in the series have always delivered on Blu-ray, as well as his other recent hit, Inception. Unfortunately the video maxes out at 480p, but we don't need any additional resolution to see the release date listed for both disc and digital download is December 3rd. Rumors have flown about different releases dates and possible extras like a director's cut, but recently sources have indicated no such extended offering is in the works. Whether you think the flick was long enough (or even too long), you can press play to check out the clip embedded after the break...and clear the first Monday in December on your calendar for a trilogy viewing marathon.

Update: The trailer has now disappeared from YouTube (trust us, you didn't miss much other than a quick "Blu-ray and digital download" tag at the end) along with the page sporting the 12/3 release date. We've slipped a screen grab in after the break, we'll let you know once there's some official information to go on.

Source: WarnerBrosOnline (YouTube)
In this article: batman, blu-ray, Christopher Nolan, ChristopherNolan, hdpostcross, hdpostmini, minipost, release date, ReleaseDate, the dark knight rises, TheDarkKnightRises, trailer, video, warner, warner bros., WarnerBros., whv
All products recommended by Engadget are selected by our editorial team, independent of our parent company. Some of our stories include affiliate links. If you buy something through one of these links, we may earn an affiliate commission.