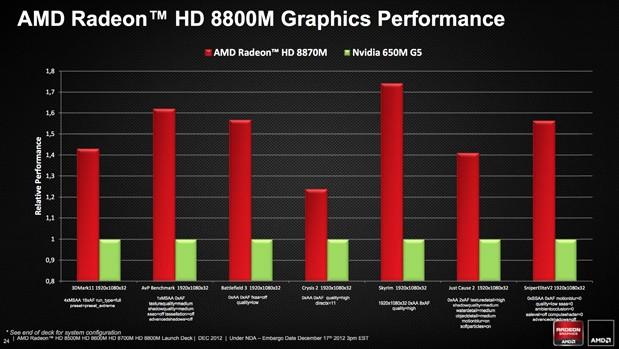 Most of the secrets surrounding AMD's latest series of mobile graphics chips have been known for a while now, but that didn't stop the company from making everything official today. Intended for traditional laptops and ultrathins alike, the Radeon HD 8000M series supports DirectX 11.1 and stands as the first of the company's mobile GPUs to incorporate the AMD Graphics Core Next architecture. The lineup consists of the Radeon HD 8800M, HD 8700M, HD 8600M and HD 8500M. The chip manufacturer announced that the Radeon HD 8000M series has already been incorporated into products from ASUS and Samsung -- no surprises here -- and also let it be known that we can expect similar offerings from Dell, Lenovo and other OEMs in short order.

Rounding out the GPU announcements from AMD, the company also took the opportunity to crow that its Radeon HD 8000 series for desktops is now en route to OEM partners. What's more, we can expect desktop rigs with this technology to begin arriving on store shelves later this month. If you're thirsty for more information, feel free to soak up the PR after the break.

The AMD Radeon HD 8800M, HD 8700M, HD 8600M and HD 8500M GPUs are graphics powerhouses, ideal for users who are seeking to upgrade their existing notebook and want a superior, industry-leading graphics experience. Whether on-the-go, at work or at home, the AMD Radeon HD 8000M Series meets the everyday demands of any user. The AMD Radeon HD 8000M Series features AMD Enduro Technology, a cutting-edge power-saving solution that scales GPU usage and power based on graphics demand. Users will experience a redesigned user interface with full user profile control that intelligently detects the power source and GPU, allowing applications to scale seamlessly. Additionally, the new user interface has default settings ideal for a majority of users, with expert mode control options for enthusiasts and power users.

Features of the AMD Radeon HD 8000M Series of GPUs:

Stable, Reliable, Feature Rich: The AMD Catalyst™ Technology is designed to allow users to control every aspect of their GPU and ensure hardware stability, as well as enabling them to unlock new features and improvements with each driver release.
Immersive 3D Visuals: AMD HD3D Technology enables 3D display capabilities for many PC applications allowing users to view, create, share and download in full stereoscopic 3D.

In this article: 8000m-series, amd, ces, ces2013, directx11.1, gpu, graphicscorenext, radeonhd, radeonhd8000, Radeonhd8000m
All products recommended by Engadget are selected by our editorial team, independent of our parent company. Some of our stories include affiliate links. If you buy something through one of these links, we may earn an affiliate commission.