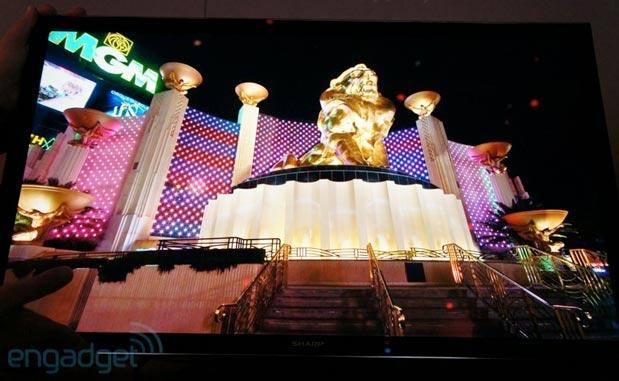 When you're surrounded by huge 4K TVs cranked to retina-damaging brightness, it's easy to get desensitized to the high resolution. But, when you are standing in front of a 32-inch monitor (31.5-inch to be exact) at that same resolution, it's a whole different story. In the gargantuan halls of CES, Sharp is showing off the 4K-resolution low-power IGZO LCD panels it announced November last year. They had two touchscreen versions on show -- one for Windows 7 and another for Windows 8 -- as well as one non-touch model. The touch versions were also slightly different in that you can lie them horizontally if you need to. Honestly, the resolution and color reproduction on the panels were absolutely incredible. They looked so good, in fact, that I fantasized about tearing it from the table and making a break for it, if only for a second.

That's the only way I could end up "owning" one, as the non-touch model will be "at least" $5500 when it launches in February, and the touch models will be "at least" $1000 more when they arrive sometime in Q2. They aren't really intended for general consumption, anyway, but for the medical sector, serious design pros and other commercial uses. The pics we got of them can be found in the gallery below, but unfortunately, it was hard to do the displays justice in the crowded, dimly lit Sharp den.

8
In this article: 4k, ces2013, display, hands-on, hdpostcross, igzo, lcd, LcdMonitor, monitor, sharp
All products recommended by Engadget are selected by our editorial team, independent of our parent company. Some of our stories include affiliate links. If you buy something through one of these links, we may earn an affiliate commission.