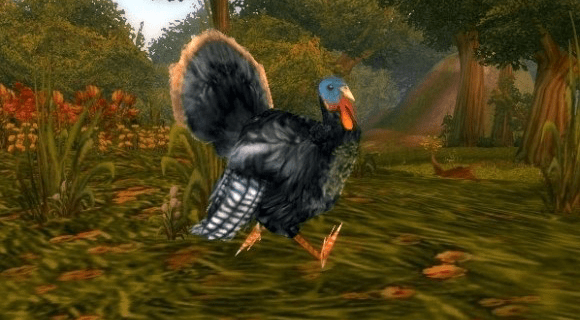 Now that MoP has been out for a few months, I find myself enjoying pet battles far more than I thought I would. That being said, it was only a matter of time before griefing made its way into this part of the game as well -- even if it is by turkeys. Yes, turkeys.

It all started with the rather harmless sounding "Triple Turkey." Unfortunately, it's not a sandwich I can nom on, but is instead something much more sinister in the world of pet battles. The Triple Turkey comp quickly became the flavor of the month for trolls in PvP pet battles, using abusing the irritating Food Coma ability to the max. If you've never encountered it before, Food Coma puts the opponent to sleep for two rounds, on a five round cooldown.


Using the Triple Turkey almost guaranteed a loss for the griefer, but only if the opponent didn't forfeit first (or rage quit). Accounts of the Triple Turkey lasting upwards of 200 rounds before forfeit by an opponent flooded the pet battle forums.

The Triple Turkey comp, as well as other crowd control heavy comps, exposed a weakness in the pet battle system. After all, pet battles are supposed to be fun, not sleep-inducing.

So, will the patch fix this?

Blizzard just released the latest updated patch 5.2 notes with several changes focused on battle pets, but one in particular caught my eye.

Pet Battles
source
Looks like turkey-stacking is on the way out! For the purists, there are still quite a few strong stacking comps available -- triple conflag comes to mind -- but at least they don't depend on mind-gaming the opponent into forfeit.

I jumped onto the PTR to see how this new change panned out, but it doesn't seem to be working as intended yet. As far as I could tell, the Resilient buff did apply for a max of three turns, but it didn't stop any crowd control effects. I'm just chalking it up to it being the PTR for now, as the change was only just made.

What battle pet or comp is your favorite right now?

In this article: battle-pets, crowd-control, highlands-turkey, mop, patch-5.2, patch-5.2-notes, patch-5.2-ptr, peddlefeet, pet-battle-strategies, pet-battle-system, pet-battle-team, pet-battles, plump-turkey, Pokemon, PvP, scalded-basilisk-hatchling, turkey, World of Warcraft: Mists of Pandaria
All products recommended by Engadget are selected by our editorial team, independent of our parent company. Some of our stories include affiliate links. If you buy something through one of these links, we may earn an affiliate commission.