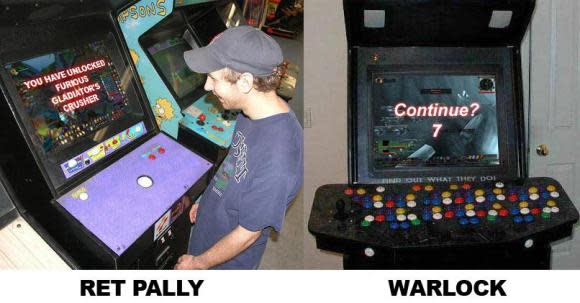 There are few things more frustrating while playing video games than being unable to control your character properly. In select cases this can be due to some fault in the game itself, but more often than not it tends to be a hardware malfunction. I had an increasingly difficult time playing Halo 3 when I would whip my controller at the wall in a blind rage every time someone would counter-snipe me just when I found a particularly good perch.

Recently though, my troubles have been with my mouse. My Logitech G500 has served me well for a few years but countless hours of furious clicking in games like Diablo III and Torchlight II have taken their toll. After some careful deliberation I decided to get the G500's older brother, the Logitech G600. I felt, playing as much WoW as I do these days, investing in a self-proclaimed "MMO mouse" would be sensible.

When I got the mouse and unboxed it, however, I was not prepared for just how many buttons this thing has. I sat with my spellbook open trying to find the most reasonable arrangement of keybinds for longer than I care to admit. Eventually I settled on a group of binds that I'm slowly but surely getting accustomed to, though not before I "misclick" and toss a Hand of Protection on a hunter.

This week I'd like to go over keybinds, discussing some general tips and going over two different schemes that I've used that hopefully some of you will find useful (unless you're left-handed, in which case I apologize that these tips may not be all that helpful for your sinister situation). If you have another setup you'd like to share, please do!


Walking around your keyboard

There are a few general pointers I'd like to go over before jumping into my own binds, in case you'd like to design your own control configuration from scratch.

Keep your most used abilities close to your "home" position. Anyone who has taken typing classes has learned that there is a set of keys on your keyboard called "home keys" where your fingers rest when you're not typing something. Unless you're using some crazy keyboard, these keys are A, S, D, and F for your left hand and J, K, L, and ; for your right hand. Most standard keyboards have raised grooves on the F and J keys so you can orient yourself without constantly looking at the keyboard.

For gamers, however, we have a different rest position, one that has been ingrained in our generation, and that is the directional movement keys of A, W, S, and D. Basically this delegates the left half of the keyboard to our potential list of usable keys, though the length of your fingers will also dictate which keys are within reach and which aren't terribly realistic.

If you don't have enough keys around A, W, S, and D, try using E, S, D, and F instead. I know many people who swear by this shift in position, though I think they have more dexterity in their ring and pinky fingers than I do.

Rebind your turning keys (A and D) to something useful. There are a few players out there who appreciate being able to rotate their character by using the keyboard, but for all intents and purposes you can simply hold your right mouse button and move your mouse sideways. As for what to bind those keys to, you can always move your strafe keys from Q and E to A and D and have two new conveniently placed binds, or you could do what I did below.

No bells, no whistles

Sometimes you just want to keep things simple, or the hardware you have at your disposal is more suited for word processing than gaming. I played on a laptop for a couple years, so having to make do with what you have is something I know quite well. The diagram below is my previous arrangement that has served me fairly well (with a few exceptions):

As you can see in the shift modifier map, I had some awkwardly placed bindings for my Hand spells. This led to me using them less often than I should, so when I got my new mouse I resolved to change that.

Tripling the number of usable buttons on your mouse can be intimidating, but once muscle memory begins to set in and you reflexively reach for the correct ability without hitting five others at the same time, that's when you'll truly appreciate it.

Of course, WoW itself doesn't support more than a small handful of mouse buttons, so in order to get the most out of those extra buttons on mice like the G600 and the Naga you'll have to use the mouse's software to bind them to unused keys on your keyboard and then bind abilities to those keys in-game. For example, for the G9 through G20 keys on the side of my mouse, I simply bound them to F1 through F12 and then bound my spells to F1 through F12.

Not having to hold Shift and reach across my keyboard to use a Hand spell has been amazing, and having all of my cooldowns at my fingertips enables me to move freely while cycling through them. I suspect I'll even be able to consolidate Holy Avenger with Avenging Wrath after the patch hits, thanks to the reduction in Avenging Wrath's cooldown to 2 minutes.

What are your bindings like, readers? If you're a lefty, what kind of a setup do you use? And does anyone use a foot pedal?

The Light and How to Swing It teaches you the ins and outs of retribution paladins, from Ret 101 and how to gem, enchant and reforge your retadin, to essential ret pally addons.