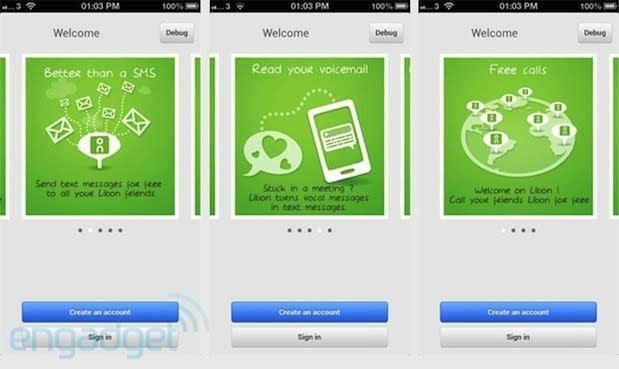 As it promised back in November, Libon is crossing the smartphone rubicon and launching on Android, starting today. The Orange-backed WhatsApp and Viber rival brings free calls, messaging and visual voicemail to any handset running Froyo and above. And though iOS users have already had this app, they aren't being left off this round of news: the company has added free picture and audio messaging to the iPhone version, as well as push-to-talk functionality. Head on down to your respective app stores to get at the goodies.

Following its successful launch on iOS in November 2012 Libon is now available on Android. The Android launch means users will now able to connect cross platform between iOS and Android, as well as with friends and family on any network in 100 countries.

"The launch of Libon on Android was an absolute must. It's overtaken iOS numbers in the smartphone OS wars and we're very excited to finally offer something to the thousands of users who have been asking about this," said Giles Corbett, Head of Libon.

At launch, Android users of Libon will be able to enjoy:

Free calls
Libon users will enjoy completely free HD quality voice calls between Libon users, wherever they are, in the same country or on the other side of the world. Contacts just need to download Libon for free from the App Store or Google Play to begin enjoying free crystal clear calls between each other on 3G or Wi-Fi.

Libon's instant messaging is as easy to use as SMS.

For every contact, Libon will pull all conversations into one place. View SMS, instant messages, calls and voicemails to give users a context when they are calling.

You don't speak the same way to your partner, your family, your colleagues or your customers so Libon lets you sort your contacts into groups, each group hearing a different greeting message. Available for Libon and GSM calls.

If a user is looking for a great Visual Voicemail on Android, Libon is the right solution. See all messages received at a glance and listen to them in any order.

And for when it's not convenient, there's no need to listen to voice messages, Libon converts voice messages from Libon calls into text*.

Contacts, conversations, messages – sync and save everything in the cloud, safe and secure.

* Available in English, French and Spanish

In addition to the launch of Libon for Android, Libon also announced a new version of Libon for iOS – version 2.2.

From now on, users can send pictures and audio messages to their Libon friends in a few seconds.

Seen something interesting? Open Libon, take a picture from the Instant Messaging screen and it's already on the friend's screen

Found a nice picture of last vacation ? Users can also send it to their Libon friends from the Photo Gallery

"Push-to-talk". Just push the button, talk, release the button and that's it – you've just sent an audio message to friends. It couldn't be easier.

Libon for Android works on Android version : 2.2 or higher and needs a minimum HVGA screen size. Libon for both iOS and Android is available in English, French, Spanish, Romanian, Slovakian and Polish.

In this article: Android, apple, google, iOS, Libon, mobilepostcross, Orange
All products recommended by Engadget are selected by our editorial team, independent of our parent company. Some of our stories include affiliate links. If you buy something through one of these links, we may earn an affiliate commission.