Apple's new TV app is a work in progress 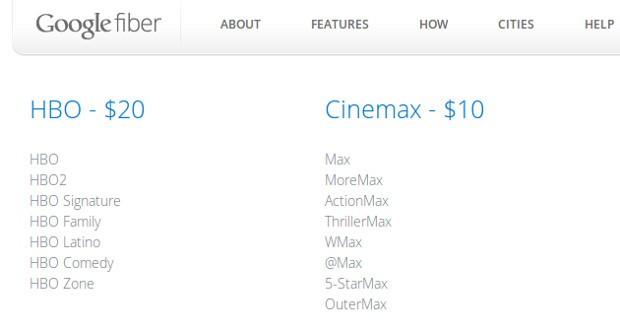 Google Fiber has a lot going for it, both as an ISP and a pay-TV platform. There was was one gaping hole in the service though: no HBO. Lets be honest with ourselves, its the big geeks that are looking to hop on that 1Gbps service first. And what do geeks love almost as much as blazing-fast Google-branded internet? Game of Thrones. Now Kansas City (and soon Austin) based nerds will be able to watch Joffrey become an even bigger monster live, rather than wait for some torrent site to get an illegal copy of it up (or, if they're smart, mooch off of someone's HBO GO account). Alongside HBO, Google Fiber has also added Cinemax: Home Box Office's less cool sibling. The branded families of channels are both available today for $20 a month or $10 a month respectively. Or, if you're a real premium TV fan, you can get both, plus STARZ and Showtime for $40 a month. Hit up the source for a few more details.

In this article: cinemax, google, googlefiber, googlefibertv, hbo, hdpostcross
All products recommended by Engadget are selected by our editorial team, independent of our parent company. Some of our stories include affiliate links. If you buy something through one of these links, we may earn an affiliate commission.