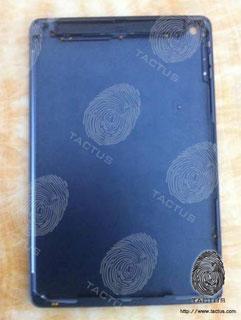 We've seen a possible case, what could be the front portion of Apple's next iPad and this time around, Tactus has got its hands on the other half, the rear casing. Unfortunately, it's the not-so-interesting view, but we can still make out the space for the hole for the camera lens, sharper corners and the same dark blue finish we saw on both the fifth iteration of the iPhone and the iPad Mini. Tactus reckons it'll hold onto the original iPad's 9.7-inch display, but surround it with a thinner bezel. As for the rest of the specs that will eventually reside inside the redesigned shell, well, we'll have to wait for the official reveal from Apple for the full story.

Update: It's worth noting that 9to5Mac spied a similarly redesigned iPad shell at the start of the year. We've included their leak after the break. Thanks for everyone that sent this in!

In this article: apple, ipad, ipad5g, rumor, tablet, targus
All products recommended by Engadget are selected by our editorial team, independent of our parent company. Some of our stories include affiliate links. If you buy something through one of these links, we may earn an affiliate commission.