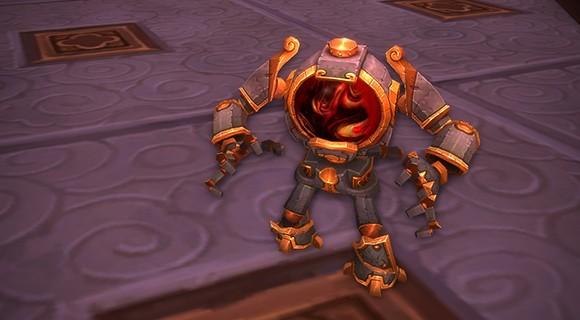 Patch 5.2 introduced a slew of battle pets, with a few as rare drops from bosses in the new Throne of Thunder raid, including Living Sandling, Ji-Kun Hatchling, and Son of Animus.

Recently, I was lucky enough to obtain Son of Animus, and it's quite a unique addition to my collection. I couldn't wait to level it! This breed 4 (4/14 or P/P) Mechanical pet uses abilities inspired by the boss that drops it, Dark Animus, and are as follows:


In slot one, Metal Fist is generally the better choice. To proc the extra hit on Batter, Son of Animus needs to be faster than its opponent, and with no bonus speed stats, the extra hit is unpredictable. Stick with Metal Fist for consistent hits unless you have a pet in your line-up that adds a speed debuff to opponents.

Slot two is interesting, and one of the reasons I love Son of Animus. Not only are the abilities themed around Dark Animus, they're both quite useful. Siphon Anima deals damage as well as heals Son of Animus for 100% of the damage dealt, which works out to be a nice heal. It's on a three-round cooldown, so you shouldn't depend on the heal, but it makes Son of Animus pretty tanky anyway. Touch of the Animus deals damage up front and places a debuff on the enemy that heals attackers every time the target is struck. It only lasts two rounds, with a four-round cooldown, but I usually pair it with my Scourged Whelpling's Plagued Blood. The two debuffs stack and Son of Animus will receive multiple heals. If using Son as a tank, switching Batter into the first slot may work well, too -- if extra hits proc, each one will trigger a heal.

Choosing an ability from slot three will depend on your strategy with Son of Animus. Interrupting Jolt deals average damage and serves as an interrupt to multi-round abilities, like Deep Breath. I generally stick with Extra Plating -- between the reduced damage and heals, as well as the Mechanical passive, Son of Animus becomes tough to kill.

The drop rate for Son of Animus is very low, and since Dark Animus is so late in ToT, there aren't many of these on the AH yet. It does drop on all difficulties of the boss, so cross your fingers! Be sure to keep at least a bag space open -- I've read reports of players winning this pet and not receiving it because of a full inventory. Good luck!

In this article: battle-pet, battle-pets, dark-animus, isle-of-thunder, Mechanical, pet-battle, pet-battles, raid-finder, raid-finder-loot, son-of-animus, throne-of-thunder
All products recommended by Engadget are selected by our editorial team, independent of our parent company. Some of our stories include affiliate links. If you buy something through one of these links, we may earn an affiliate commission.