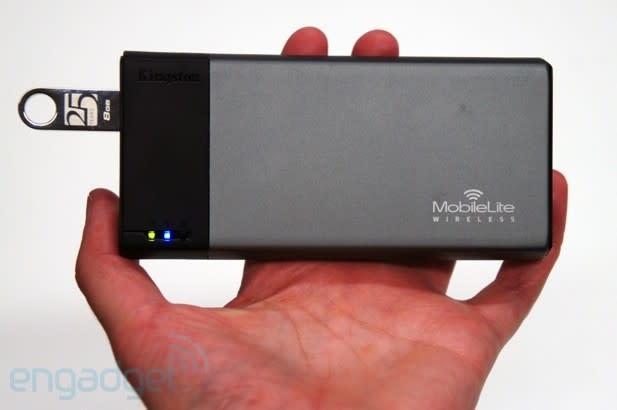 By all metrics, Kingston's wireless Wi-Drive has been a successful product: the company is still selling it two years later, and has since refreshed it with beefier storage and Android compatibility. If there's one thing customers complained about, though, it was the lack of expandable memory -- a problem if you used all the space on the drive, or if you already had stuff stored on an SD card. With that in mind, the company's coming out with the MobileLite Wireless, which ditches internal storage in favor of an SD slot and USB 2.0 port. (It will also ship with a microSD adapter.) At the same time, it packs a modest five-hour battery you can use to recharge USB-powered gadgets; Kingston says there's enough juice in there to fully charge a phone, but probably not a tablet.

Technically speaking, you can access everything stored on the device by typing the MobileLite's IP address into a browser. But for all intents and purposes, this is currently an iOS exclusive, as that's the only platform for which you can download an app. As with the Wi-Drive, though, Kingston plans to add an Android app, as well as one for WP8. In the beginning, at least, it will be available through just a couple sellers (Amazon and Staples), with street prices expected to fall somewhere between $50 and $70. Any questions? We hope not: this thing's aimed squarely at mainstream users, so if Engadget readers don't get it, we're going to be seriously concerned about all the regular folk. Kingston's new MobileLite Wireless is the ultimate companion to keep up with one's active lifestyle, giving users access to unprecedented mobile essentials at a great price. It is as easy as plugging in any USB Flash drive into the USB port to quickly watch and share movies or view and share files wirelessly on mobile devices. The SD/SDHC/SDXC slot enables fast, easy sharing of images with friends and family by removing the card from a camera and plugging it directly into the MobileLite Wireless. The included adapter allows the same access and sharing for microSD cards used in many mobile phones and tablets.
      
MobileLite Wireless also serves as an emergency backup battery charger to keep devices going longer. The charging feature works with most mobile phones as it charges them via the device's USB slot. MobileLite Wireless has a rechargeable battery which can handle up to five hours of continuous use as a wireless reader, easily handling long road trips.
MobileLite Wireless allows streaming and sharing of data with up to three users simultaneously. Like the Wi-Drive, the new device allows simultaneous connections to both device and router via Wi-Fi so, for example, one can stream music and browse the Internet at the same time. The MobileLite Wireless app is available now for Apple devices and soon for Android and Kindle Fire. Support for Windows Phone OS, Windows PC and Mac are forthcoming.

"When we released Wi-Drive, our customers loved the idea of storing and sharing content from a wireless device but wanted additional slots to plug in everyday items like USBs and cards. We listened to them through the entire process," said Craig Tilmont, wireless products business manager, Kingston. "MobileLite Wireless is really easy to use but just in case, we created videos and even a simple walkthrough tutorial when people first access the app. One thing people often forget is that Kingston offers free technical support. We are here to help people set it up if needed. I think once people give this product a try, they will recommend it to their friends."

Kingston is celebrating 25 years in the memory industry. The company was founded on October 17, 1987, and has grown to become the largest third-party memory manufacturer in the world. The 25th anniversary video can be found here, along with more information, including a timeline of Kingston's history. In addition, HyperX memory is celebrating its 10th anniversary. The first HyperX high-performance memory module was released in November 2002.

In this article: charger, chargers, hands-on, Kingston, MemoryCardReader, MobileLite, MobileLite Wireless, MobileliteWireless, mobilepostcross
All products recommended by Engadget are selected by our editorial team, independent of our parent company. Some of our stories include affiliate links. If you buy something through one of these links, we may earn an affiliate commission.