Fist of Awesome punches bears on PC and Mac 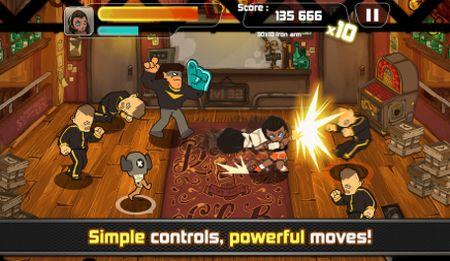 Combo Crew is an interesting experiment that just showed up this week on iOS. Beat-em-ups and fighting games are great on consoles, where you've got plenty of buttons and d-pads to pull off various moves with. But while they've appeared on iOS a few times (Capcom's Street Fighter IV has done fairly well on the App Store), usually these games on a touchscreen tend to just fall back on virtual buttons, which are generally way more clunky and less precise than physical moving parts.

Combo Crew, however, is an attempt to make a beat-em-up redesigned from scratch for the iOS touchscreen. It's a game made by the Game Bakers, a really excellent team based in France that's done a great job with the Squids turn-based combat series. Combo Crew has everything you'd want a beat-em-up game to have, including multiple characters, combination-based and counter attacks, and lots of cool super moves and punches. But the difference here is in the controls. Instead of pressing buttons, you swipe across the screen to perform your moves in sequence: Swipe once to attack, swipe and hold to charge up, swipe two fingers for a combo attack or tap the screen for a counter.

It works -- mostly. Just like a traditional beat-em-up game, Combo Crew's moveset gets more complicated over time, so that once mastered, you're able to keep combos going for a long time, scoring tons of points and taking down the bad guys with ease. Unfortunately, the biggest issue is that you're swiping right across the screen you're playing on, so sometimes it can be hard to see where you need to go. Thus, precision isn't always exactly where you want it to be. If you swipe the screen, you will do an attack, but there's no way to move around the screen independently, and as a result, you don't always attack the exact enemy you want, which can be a problem at higher levels.

Combo Crew is still a lot of fun, however, and The Game Bakers deserve a lot of credit for taking on such a tough genre to do on a touchscreen in such a creative way. There's even a co-op mode, and an endless-scoring game with plenty of various progression items to unlock and earn. If you like beat-em-ups and want something to enjoy on your iPhone, this one is a must-play for sure, just to see how it all works. The game is currently just $1.99, too, so if you're interested at all, give this one a download.

In this article: beat-em-up, buttons, combo, combo crew, ComboCrew, consoles, daily app, daily iphone app, game bakers, GameBakers, iOS, iPhone, newsletter, review, swiping, the game bakers, TheGameBakers
All products recommended by Engadget are selected by our editorial team, independent of our parent company. Some of our stories include affiliate links. If you buy something through one of these links, we may earn an affiliate commission.
Share
Tweet
Share