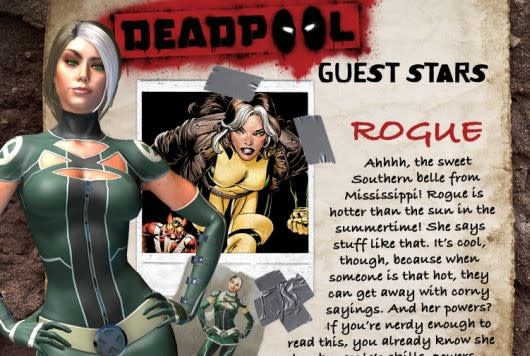 Cable, Wolverine, Psylocke, and Domino were already announced as making appearances in the upcoming Deadpool game by High Moon Studios (due out on June 28), and now you can add one more X-(wo)man to that list. Rogue is joining the team, and as you can see above, she's brought a new look with her. 3
In this article: activision, comic-books, deadpool, high-moon-studios, marvel, microsoft, pc, playstation, ps3, rogue, wolverine, x-men, xbox, xmen
All products recommended by Engadget are selected by our editorial team, independent of our parent company. Some of our stories include affiliate links. If you buy something through one of these links, we may earn an affiliate commission.