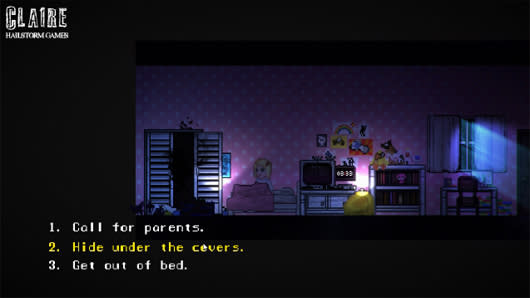 A girl and her dog are trapped and stalked in the nightmarish world of Claire, a 2D horror game currently looking for votes on Steam Greenlight and aiming to launch on PC, Mac and Linux.

Claire follows the protagonist and her canine companion through several stages of life, in a tale that eventually uncovers her connection to a bizarre world. As a spooky story, Claire adheres to certain tenets of the survival-horror genre, like scrounging for items, managing supplies and helping others trapped in the environment. Enemies, which appear to be black clouds of evil, can be defeated by the light – flashlights and flashbang grenades are specifically mentioned on the Steam Greenlight page.

The game, which is currently in alpha, also promises to have a built-in editor for creating and sharing custom levels. Hailstorm Games hopes to launch Claire in October or November of this year.
In this article: claire, hailstorm-games, horror, indie, linux, mac, pc, steam, steam-greenlight, survival-horror
All products recommended by Engadget are selected by our editorial team, independent of our parent company. Some of our stories include affiliate links. If you buy something through one of these links, we may earn an affiliate commission.