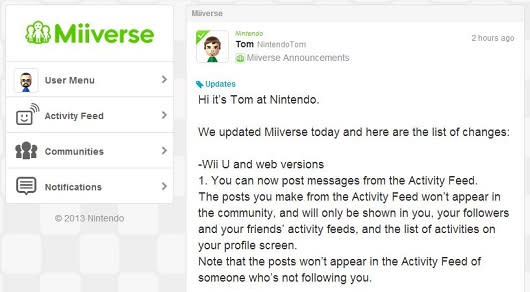 The Wii U Miiverse has been updated to allow posting directly to your own Activity Feed, your friends' feeds and that of your followers. Previously, Miiverse users were only able to post messages directly to the communities surrounding specific games.

Unlike the Miiverse communities surrounding individual games, Activity Feeds serve as a social networking vehicle on Wii U and are tied to your Wii U friends, not particular games. Your Activity Feed, for example, is only displayed to your friends and those who follow you on Wii U.

Nintendo has been steadily iterating upon the Miiverse since its introduction last year. The last significant update doubled the amount of characters each message could contain and prior to that, web profile customization was added. Nintendo has said that it expects to launch Miiverse on 3DS sometime this year.
In this article: activity-feed, miiverse, nintendo, update, wii-u
All products recommended by Engadget are selected by our editorial team, independent of our parent company. Some of our stories include affiliate links. If you buy something through one of these links, we may earn an affiliate commission.