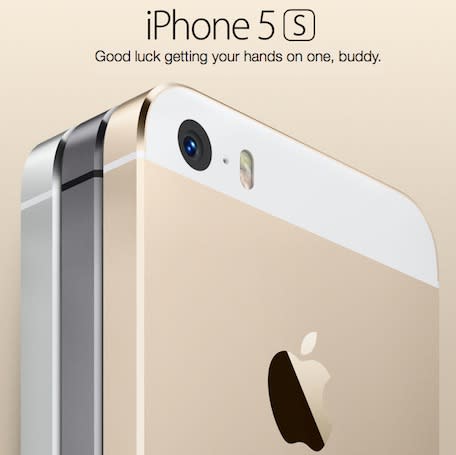 AllThingsD blogger Ina Fried is reporting that sources at multiple US mobile carriers are giving her the word that the inventory of the iPhone 5s will be surprisingly low on Friday, September 20. One carrier source even went so far as to say that, "We will have grotesquely unavailable inventory." Another carrier complained of "extremely disappointing shipments from Apple," but thought that demand for the iPhone 5s might not be as high as originally anticipated.

Boy Genius Report had originally reported on "severely constrained" supplies, citing "multiple sources." Although we usually take BGR's advice with a large grain of salt, the concurrence of AllThingsD's sources seems to bear out the fact that demand for the iPhone 5s may far exceed the initial supply.

The constrained supply is probably the reason why Apple and its partners have decided not to provide pre-orders for the device until Friday, opting to have as many devices as possible available in physical storefronts around the world. According to AllThingsD, and given Apple's history of reticence, "an Apple representative declined to comment."

It appears that if you wish to get your hands on an iPhone 5s on Friday, it will be a very good idea to be at your local Apple or carrier store as early as you can.

In this article: allthingsd, Apple, Boy Genius Report, inventory, iPhone, iPhone 5s, SciTech, supply constraints, SupplyConstraints
All products recommended by Engadget are selected by our editorial team, independent of our parent company. Some of our stories include affiliate links. If you buy something through one of these links, we may earn an affiliate commission.