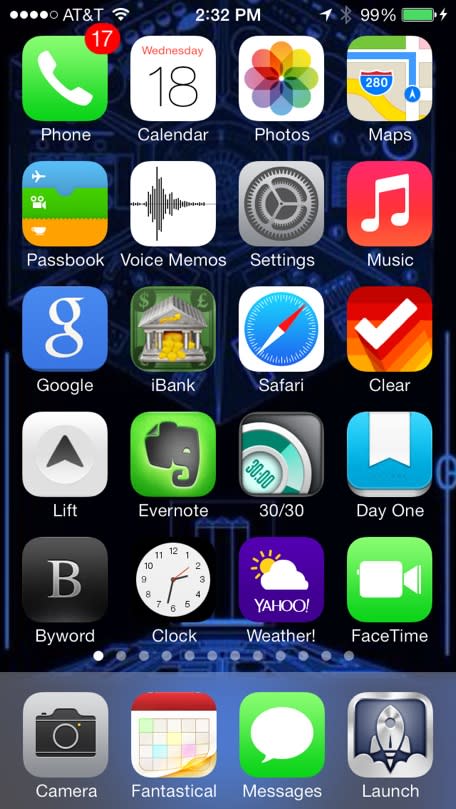 Note: I'll be updating a few times today as I get my feet wet with iOS 7. Here's the first.

I decided to wait. I traveled to New York today, and set up camp in the Tekserve offices in Manhattan to download the new mobile OS from Apple, iOS 7.

The setup was a breeze, but this time required a passcode and warned me that I chose a crappy one. You can always turn it off later, but I'm happy Apple is pushing your first line of defense for a secure phone.

Those flat icons will startle some. It took a minute for my brain to re-adjust to the icons, and there was a pause as I searched for the Settings and Photos, both of which were on my home screen.

Icons now zoom in and out, as do folders, but after a while, the zooming in/out starts to get annoying, much like the Genii effect in OS X got tiresome over time.

Sending a photo? Totally different and so much better. I took a screenshot and it appeared right next to the last photo taken, and it was fast and easy. A little more confusing are the pencil-thin lines indicating other features below, but all I wanted were some photos sent via mail for now. I was worried about auto-updates but Apple smartly asks if you want to turn this on. I don't, just because I have a lot of apps and I have seen a massive spike in the number of bad binaries that hit the store, only to see an emergency update get sent up a day or two later. I have too many mission-critical applications to worry that something will blow up when I need it most. This isn't an Apple problem, it's a clarion call to developers to get the bugs fixed before hastily trying to time a release with some external event. Developers: Get it together. Cupertino Is Messing With Me

Something I really hate, and Apple has always done this in iOS: Re-arranged icons. Here's the thing, Cupertino. Some of us have spent hours futzing with our home screens. Now you come in with your popped collar and swagger and decide that the lamp should be on the floor in a million pieces. Well, maybe I had OmniFocus in a particular spot for a reason! No matter, you moved OmniFocus, which was the "last" icon on my first screen to the second "page" -- all by itself. And iOS 7 pushed everything over to make way for FaceTime. Really? Annoying. Now I get to re-arrange things. Again.

Game Center is much nicer. I love the animations when accepting new people.

The Compass becomes an inclinometer! Fun.

Passbook no longer shreds a pass, but looks more like an old TV turning off. It still requires a lot of thumb aerobics to get there, but obviously you don't want to make it too easy. iOS 7 removes one click from the previous four it took to delete a card.

Really digging the new Calendar. Information is clean and gestures get you where you need to go easily. It reminds me of a Calendar app that came out long ago, but was subsequently ruined by update after update.

Notes will really throw people as it now looks like a generic "note" app on the Store.

While using Notes I discovered something slightly annoying with iOS 7. While I appreciate being able to swipe to traverse "up" or "back" in an app, it seems you can only do this in certain parts of the screen. In Notes, you have to swipe in an area with text. In Settings, you have to swipe... somewhere. For me the sweet spot was about 2/3 of the way down the screen. As an initial impression, I think this will confuse people. Luckily Apple still has buttons for navigation at the top of these screens, but I'd like to see more brains built into these gestures if they are to become the new physical language of interaction on iOS.

And finally, in my brief first dive into iOS 7 I really enjoyed switching among applications. I always hated just looking at icons, and now I'm able to see frozen screens for each app. This has some practical purposes, but I think the direct result will be more about users feeling more comfortable with what's going on, and hopefully not worrying so much about keeping apps open. I know some aren't liking the way the icons and screens scroll, but within moments I was used to it and prefer it over the old method.

Parallax? Doesn't do it for me because I already had photos as my lock screen and wallpapers. I have yet to change them. Priorities, people!

So that's my first five minutes with iOS 7! I'll try getting to my hotel and seeing what the next hour brings. I am not updating my iPad yet -- all of this is from the iPhone 5.

In this article: features, iOS, ios 7, Ios7, iPhone, review
All products recommended by Engadget are selected by our editorial team, independent of our parent company. Some of our stories include affiliate links. If you buy something through one of these links, we may earn an affiliate commission.