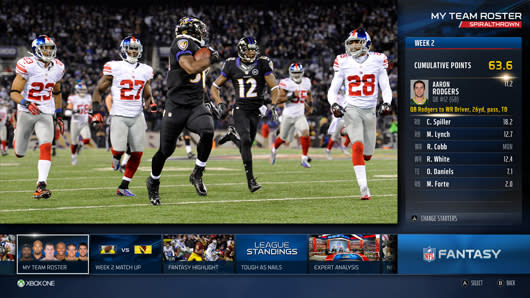 Microsoft is hoping to offer more sports programming on Xbox One. Speaking to Bloomberg, Phil Spencer, Corporate VP of Microsoft Studios, said Microsoft believes "sports is a very interesting category globally" and that the company will be "expanding what we do in sports to bring more international sports into the mix."

In May, Microsoft announced a new partnership with the NFL that would see live broadcasts on Xbox One. Earlier this month, ESPN announced it too would present live content on Xbox One.

This is all part of an overall more concentrated effort to present more programming on Xbox One beyond the console's ability to be a TV middle man. In addition to its agreement with the NFL, Microsoft has also created a specific Entertainment division that is currently working on the Halo TV show. Former CBS executive Nancy Tellem is heading up Entertainment and original programming on Xbox One.

In this article: live-tv, phil-spencer, sports, tv, xbox-entertainment-studios, xbox-one
All products recommended by Engadget are selected by our editorial team, independent of our parent company. Some of our stories include affiliate links. If you buy something through one of these links, we may earn an affiliate commission.