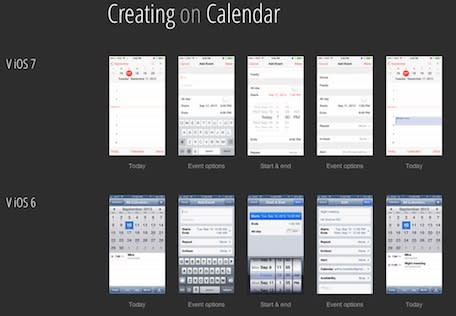 For app developers and bloggers, it's very instructive to have an idea of what has changed in the user interface of an app. App developers can look back and see how both the "look and feel" and steps required to perform a workflow have changed, while bloggers and other writers can use the information to update books or write posts about upgrades. Fortunately for both parties, there's a website called UX Archive run by two French developers (one of whom has moved to the Bay Area) and an American that plans to be an online museum of sorts, exhibiting the changes in app user interfaces and workflows over time.

The site neatly divides the screenshots by app and task, so you can narrow down a search to just one particular task -- like creating, deleting, recording, sharing or uploading -- in one specific app. While there aren't a tremendous number of apps and versions currently archived (I counted 60 apps, with only a few showing the changes between iOS 6 and iOS 7 versions of those apps), it's a good start and UX Archive will be a helpful tool in the future provided the curators keep up with the updates.

If you sign up for a free email list, UX Archive will ping you when a new workflow is added to the site.

In this article: developer, iOS, iOS 6, ios 7, Ios7, SciTech, user interface, UserInterface, UX, ux archive, UxArchive, website
All products recommended by Engadget are selected by our editorial team, independent of our parent company. Some of our stories include affiliate links. If you buy something through one of these links, we may earn an affiliate commission.