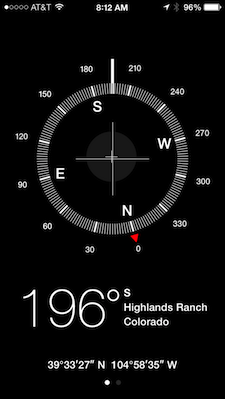 Before you start thinking about relying on the iPhone compass app for your next hiking trip, you might want to read the results of tests performed by TechHive. While some believe that the compass issues are limited to the new iPhone 5s and 5c, the tests showed that the problems go well beyond those two models.

The TechHive team used the Compass app in both iOS 6 and iOS 7 on a range of phones from the iPhone 4 to the iPhone 5s and 5c. All phones were re-calibrated several times, and the testers found that the results varied greatly regardless of location (inside or outside). The expensive phones were tested against a reliable and cheap -- US$15 -- Suunto A-10 compass.

Tests with an iPhone 5s showed a variation of 10 to 22 degrees, while a 5c showed more consistent results of 9 to 12 degrees off. The iPhone 4s showed an average of 14.5 degrees variation. TechHive found that the worst deviations came from the last year's iPhone 5, with one phone showing anywhere from a 15- to 28-degree deviation.

By the way, TechHive took on the testing initially as a way of verifying Gizmodo's claim that the iPhone 5s "level sensor" is out of whack. TechHive found that to work just fine, but noticed that the direction-finding capability was horribly wrong.

It should be noted that the test results are associated with the Compass app, not the iPhone's GPS capabilities. However, it's worth considering the purchase of an inexpensive -- and much more accurate -- traditional magnetic compass if you're heading for the deep woods.

In this article: compass app, CompassApp, iPhone, iphone 5c, iphone 5s, Iphone5c, Iphone5s
All products recommended by Engadget are selected by our editorial team, independent of our parent company. Some of our stories include affiliate links. If you buy something through one of these links, we may earn an affiliate commission.
Share
Tweet
Share