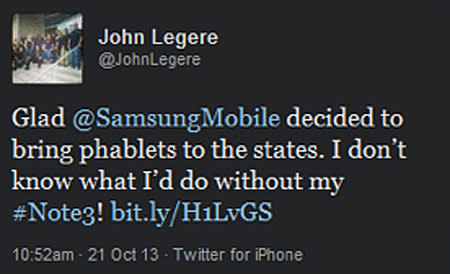 When you're the CEO of a major wireless carrier you need to make sure you show no bias towards one manufacturer over another. That must be why T-Mobile boss John Legere used his iPhone to tweet about the Samsung Galaxy Note 3 earlier today. So just what would Legere do without his Note 3? Well, probably use his iPhone even more -- or at least that's my best guess.

In Legere's defense, there's no way I'd be using that cake-pan-sized, late-'90s-era, stylus-equipped smarphlabletone (it's a word, I said so) to check my tweets either. You could pull a muscle lugging that thing out of your pocket every 30 minutes, and a big-time CEO can't be out of commission like some common peasant.

Legere later tweeted a photo of two of his smartphones -- the Note 3 and a new iPhone 5s -- just to prove that he does in fact carry multiple devices. In all seriousness, it only makes sense that someone as connected as Legere would carry multiple phones with him, and if I were him I wouldn't care which one I tweeted from either. Still, that doesn't make it any less funny, so we'll have a laugh at his expense for a moment and then move on with our lives. Deal?

In this article: iOS, iPad, iPhone, iPod, john legere, JohnLegere, smartphone, tablet, twitter
All products recommended by Engadget are selected by our editorial team, independent of our parent company. Some of our stories include affiliate links. If you buy something through one of these links, we may earn an affiliate commission.