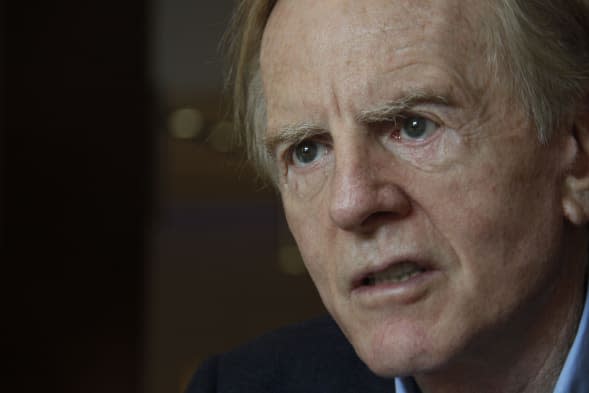 For anyone who has followed Apple's history, John Sculley is a familiar figure. He was the CEO who famously ousted Steve Jobs from the company he co-founded in 1985; he championed the ill-fated Newton; and he eventually left Apple as its profits turned to losses in 1993.

Yesterday afternoon, The Globe and Mail published a report that has the potential to change that legacy. According to the piece by Steven Chase and Iain Marlow, the man who fired Steve Jobs is considering a bid for BlackBerry.

With the company's market share reaching laughable levels, losses nearing the billions and job cuts becoming the norm, speculation about who will take on the seemingly impossible task of saving BlackBerry has reached fever pitch. Fairfax Financial has put in a preliminary offer for $4.7 billion; RIM co-founder Mike Lazaridis is apparently exploring a bid; and there's even talk of early negotiations with the likes of Google, Intel and Samsung, among others. While Sculley has yet to comment on the news of his potential interest, he did tell The Globe and Mail that whoever takes on BlackBerry will need serious management experience to bring it back from the brink. The question is: Does Sculley have the chops?

Sculley's journey to Apple started with soda pop. As president of PepsiCo, he was credited with turning the beverage maker's reputation around and giving Coca-Cola a run for its money. It was this marketing expertise that enticed Apple's board, despite his lack of experience in the computer industry, but as he told The New York Times, "IBM is a formidable competitor. But so is Coca-Cola."

When he joined Apple in 1983, the computer maker was looking to take its business to new heights and Sculley seemed like the right man for the job. During his time there, sales reached record levels, and he became a champion of personal computing. In the late 80s and early 90s, Apple was on top of its game, releasing successful products like the Powerbook. But as competition heated up and Microsoft became more of a threat, it seemed Apple and its leader were losing focus. Newton in hand, Sculley foretold a future where a hand-held computer would become the norm. However, the Newton proved to be the wrong device at the wrong time, and competition in the PC market led to losses at Apple. In June 1993, just before the company announced a $188 million loss, Sculley stepped down as president and soon resigned as chairman of the board.

Soon after leaving Apple, in 1994, Sculley joined Spectrum Information Technologies, a wireless communications company that the SEC was investigating for fraud. That job ended four months later in a storm of lawsuits, when Sculley became aware of the investigation, and later that year he took on a part-time consulting gig at Eastman Kodak. Sculley's reputation as the marketing man with a golden touch was still intact and Kodak believed he could apply the skills he'd displayed at both Apple and PepsiCo to its business. In an interview with The New York Times, Kodak chairman George M. C. Fisher said, "I am confident that John can help Kodak develop a more aggressive marketing approach."

... For all of his post-Apple successes, Sculley's public persona is still deeply tied to his tumultuous relationship with Jobs.

It was that reputation that would gain him the title of "Marketing Person of the Year" from both Advertising Age and Ad Week Magazine. Unfortunately, no amount of marketing skill could make up for what Sculley said in a recent interview at Miami ITExpo, was a failure on Kodak's part to "culturally adapt." During his time consulting with Kodak, he says he recommended that the company make the digital leap by getting into the software business and buying Adobe, which was still relatively small at the time. That deal ultimately did not happen and Kodak eventually filed for bankruptcy in 2012.

He's since served on the boards of a number of successful companies, and was a founding investor for MetroPCS and Hotwire.com among others. He and his brothers, Arthur and David, currently run the aptly named investment firm, Sculley Brothers, which reportedly focuses primarily on healthcare solutions. However, for all of his post-Apple successes, Sculley's public persona is still deeply tied to his tumultuous relationship with Jobs. A Google search of his name today brings up a mix of headlines about his possible BlackBerry bid and links to interviews about Jobs' firing.

In his statement to The Globe and Mail, Sculley said, "I've been a long-time BlackBerry fan and user." Love of the brand won't be enough to save BlackBerry, however, and as he pointed out, it's going to require a leader with a strong strategy and experience. At least on paper, Sculley could fit that description. Now it's up to BlackBerry to pick a suitor.

Photo: Hindustan Times via Getty Images
In this article: apple, bid, blackberry, ceo, john sculley, JohnSculley, mobilepostcross, rim, sale
All products recommended by Engadget are selected by our editorial team, independent of our parent company. Some of our stories include affiliate links. If you buy something through one of these links, we may earn an affiliate commission.