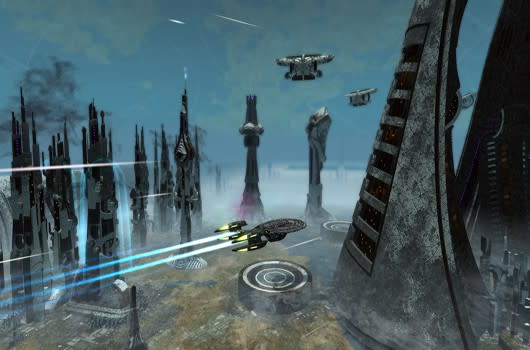 It's been another great week of new information about Star Trek Online's upcoming new Featured Episode and Season Eight. We've learned that the new FE, which is set to be released on Thursday, October 31st, will be called Sphere of Influence. The title isn't a much of a surprise as most of us have been expecting that the new FE will carry Star Trek Online's story from the Iconian gate on New Romulus to the new content featuring a Dyson Sphere in Season Eight.

A new sponsorship system will be added to STO's reputation system, which should benefit those of us who like to play multiple alts. I've also had a chance to peruse the new Voth Command reputation faction on the Tribble test server and learn it contains some interesting new passive skills.

Finally, a lot more content has been released onto Tribble, including the new Solonae space adventure zone. There's also some great news for those who don't subscribe to STO but still want to test the new content: Tribble has been opened up to all players, not just subscribers! If you don't want to know anything about the new content, be warned: This column will have a few spoilers!

One of the more frustrating things about any game with a reputation system is the grind that the player feels that she must endure if she wants to access to the rewards on more than just her main character. The reputation factions in STO are no different and have even kept me from putting in effort on multiple characters. While the burden of the grind won't be erased, it will definitely be lessened with the upcoming Reputation Sponsorship project that will be implemented in Season Eight.

The new sponsorship tokens will allow a player who has at least one character that has achieved Tier 5 status with a single faction to "sponsor" another character on the same account with that faction. The Tier 5 character will have a new project available on the reputation UI titled Begin Sponsorship Procedures for Upcoming Officer. The project will require 100 marks of the faction desired and will complete in five seconds. The project will reward the character with a token that can be placed into the account-shared bank to be picked up by the character whose reputation needs boosting. That character will begin another new project called Claim Sponsorship, and once that completes five seconds later, all future reputation XP gained by that character will be doubled.

So while it will still be a bit of a grind to get through all five tiers on all three current factions, it will now take half the time it used to. This is a nice gift to those of us who are admitted altaholics.

Once again I had the opportunity to jump into STO's Tribble test server to take a peek at the new content that's being tested for Season Eight. As the story goes, the player is brought to the zone because she is needed to help the Allied Command seize and maintain control over the Dyson Sphere. The bad news is, the Voth have also discovered the Dyson Sphere and the fact that the sphere is creating Omega particles.

In Star Trek, the Omega particle is the most unstable yet most powerful element known to exist. They are so powerful and so dangerous that there is a standing order to eliminate such particles if they are ever discovered.

In Star Trek Online, the particles are being generated by the sphere itself, and the Voth don't want to destroy them; they want to use the elusive element for their own (presumably) nefarious purposes... like taking over the galaxy!

The first map, called the Allied Zone is a large area of the Dyson Sphere interior that is chiefly held by the allied forces of the Romulan Republic, the Klingon Empire, and the Federation. The zone contains four main areas: Allied Joint Command, the Ion Stream, the Minefield, and the Supply Depot.

Players will have an opportunity to pick up one of several different missions from command and then travel over to the affected area and carry out the orders. In my case, I was asked to scan anomalies, find cloaked Voth ships in the Ion Stream, and assist disabled ships with repairs near Allied Joint Command. Each mission rewarded a mix of marks, commendations (another commodity that will be required on some of the Dyson Command reputation projects), expertise, and dilithium. A few of the missions can be repeated only once per day.

The other area is called the Contested Zone and is pretty close to being the space-combat version of the ground territory control area that I covered in last week's Captain's Log. The objective will be to take and hold control of strategic towers in the areas in order to control the energy distribution network.

The area is quite large. It's a bit disconcerting to know that your ship is moving at full impulse and yet the sometimes the surrounding landscapes appear to almost stand still. I didn't get an opportunity to test out any of the combat near the towers, and admittedly the one time I did try, the glitch-monster attacked the enemy first, leaving the group un-targetable near a large tower. (It is a beta test for a reason.)

The enemies I did get to fight were far too powerful for just my Chimera class vessel. Two Voth battle cruisers kept me hitting that "respawn" button far more often than I had hoped. Like the ground battle I experienced last week, this content is made for grouping; success will likely be achieved only through teamwork and strategy.

Finally, I had the chance to take a good look at the Dyson Command reputation system. As in all previous incarnations of the system, the player will be rewarded with a new passive skill as she achieves each successive tier. While these skills may (and will very likely) change before they go live, I thought I'd toss out what was available.

Tier One skills are ground-based and will allow the player a choice between Deadly Aim (10% critical severity) or Integrated Nanofibers (minor damage resistance in ground combat). Tier Two skills are space-based and give a choice of Advanced Targeting Systems (10% critical severity) or Advanced Hull Reinforcements (+5 damage bonus resistance rating).

Finally, a player will have only one choice available at Tier Five. Called Defiance, it's what I have personally called a ground-version of the beloved engineering skill Miracle Worker. If the skill goes to Holodeck unchanged, it will provide a player with the ability to come back from a severe blow or to go down in a blaze of heroic glory. Before the skill can be activated, the player's health must be below 50%, and once it is triggered, it will give a damage resistance and damage buff and a heal-over-time. The more formal stats look like this:Not bad, I say, but then again I've always preferred ground combat in STO, so I'm thrilled to see the new perks for those of us who do. Next week I hope to be covering a bit more about the highly anticipated Featured Episode. Until then, live long and prosper!