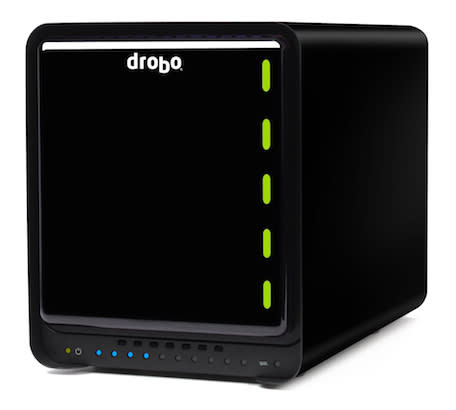 Data Robotics (now Drobo) was the first company to make expandable RAID storage easy, and with the current Drobo line of BeyondRAID devices they've now made the devices faster through the use of Thunderbolt and USB 3.0 connectivity, as well as the Drobo Accelerator Bay's ability to use an mSATA SSD for fast caching. In this TUAW review, I'll take a look at the Drobo 5D (US$664 on Amazon), a five-bay device designed to give creative professionals fast and inexpensive RAID storage.

Setup of the device is simple -- I didn't even use the instructions, since from past experience I know that you basically just hook up power, install drives, and connect the device to your Mac. Well, that was fine, but my OS X Mavericks-equipped MacBook Pro did't want to see the Drobo until I re-installed the Drobo Dashboard software a second time.

After that minor annoyance, it was time to use the Drobo Dashboard app to format the drive. Drobo provided three 1 TB drives, a 2 TB unit, and a 3 TB drive to fill the bays in the device. The device also contained an mSATA SSD in the Drobo Accelerator Bay (below). Once formatted, the device had 7.27 TB of storage capacity, of which 4.47 TB was available for data. 931.50 GB was set aside for expansion (if I decided to put, for example, three more 3 TB drives in place of the existing 1 TB drives), and 1.88 TB was used for protection. What's great about Drobo's BeyondRAID technology is that it's possible to replace failed drives or hot-swap different drives without fear of data loss. I used to own a Drobo Pro, and found it simple to add drives and replace small capacity drives with larger ones at will.

The device not only has Thunderbolt connectors (two), but can also be used with USB 3.0. Cables are included in the box, so it's literally a plug-and-play storage solution. The two Thunderbolt ports are perfect if you wish to daisy-chain Drobo 5Ds and add in a monitor or two... One last comment, although it really doesn't have anything to do with setup -- the new pricing on the Drobo products is a refreshing sign. It will put the expandability and safety of RAID storage into the hands of many more professionals.

Benchmarking the Drobo 5D was done with Intech Software's SpeedTools QuickBench 4.0 software. To ensure accuracy in testing, I performed a 100-cycle complete test. This subjects the drive to sequential and random read and write tests with file sizes from 4K to 100 MB, then graphically or textually displays that information to show the "sweet spots" for a specific drive or array. For example, if your work involves shuffling around a lot of very large files, you'll probably want a drive that has peak read/write speeds for files around your average file size.

The tests were performed both with Thunderbolt and USB 3.0. Using Thunderbolt, the standard test results (nine different file sizes between 4 KB and 1024 KB) showed average speeds as follows:

For the large test -- transfer sizes between 2 and 10 MB -- the average results were:

And for the extended test -- transfer sizes between 20 and 100 MB -- the average results were:

These results are all much, much better than what we saw for the first-generation Drobo Pro under FireWire 800. For those tests, there were only two results -- write and read speeds -- and they weren't that good. Write speed was 29.3 MB/Sec, while read speed was 46.0 MB/Sec.

The Drobo 5D is much faster than the old Drobo Pro, especially when using a Thunderbolt connection. It might just be the fast connection, but I'm willing to bet that the addition of the SSD accelerator bay has also provided a boost to performance.

In terms of the physical size and weight of the Drobo 5D, it's barely larger than the original Drobo with four bays. The 5D measures in at 10.3 long x 7.3 high x 5.9 wide, and weighs just 8.5 lbs without drives and power supply.

I have to admit that one thing that used to drive me nuts about my original DroboPro was the sound of the device. I could constantly hear the hard drives chattering away. The Drobo 5D appears to be much quieter, as I could barely hear the device even when it was in the middle of read/write testing. Since each bay can be filled with an SSD if you have the money and the inclination, you could really have a silent and fast BeyondRAID array working for you.

Having used a DroboPro for several years, the new Drobo 5D is a refreshing update to the creative professional storage solution. It retains the ease of use and setup of the original Drobo products, but brings an amazing amount of speed to the game.

TUAW will be reviewing some other Drobo products in the near future, including the Drobo 5N NAS network-attached storage product and the Drobo Mini.

Anyone with a need for relatively fast, expandable, and reliable storage in vast quantities

In this article: BeyondRAID, drobo, drobo 5D, Drobo5d, Mac, RAID, storage
All products recommended by Engadget are selected by our editorial team, independent of our parent company. Some of our stories include affiliate links. If you buy something through one of these links, we may earn an affiliate commission.